John Kampfner The Rich: From Slaves to Super-Yachts: A 2,000-Year History

The Rich: From Slaves to Super-Yachts: A 2,000-Year History 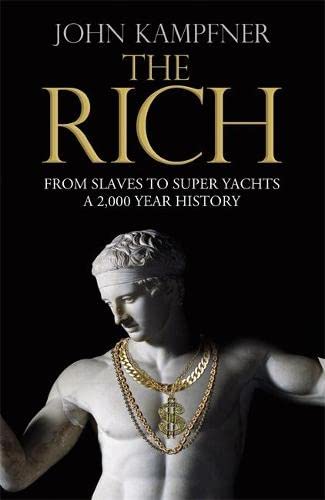 John Kampfner is one of the UK's most respected and iconoclastic authors, broadcasters and commentators, and has been a well-known public voice on politics, international affairs and civil liberties for the past two decades. From 2005 to 2008 he was Editor of theNew Statesman, and he contributes regularly to the Guardian,Independent, Financial Times and other newspapers. His previous books include Freedom for Sale and the bestselling Blair's Wars. He lives in London.

A panoramic and solidly researched new book . . . Good books leave you knowing more than you did to start with, and feeling less complacent about what you believed. On both of those counts, The Rich does the business * Weekend Australian * The Rich bursts with fascinating details about the lives of a colourful cast of ultra-wealthy characters . . . a sweeping narrative that traces a lineage from the majesty of earlier ages to the oligarchs and tycoons of the present day * Financial Times * A vivid account -- Chris Blackhurst * Independent * More readable than Piketty . . . original and enjoyable -- Martin Vander Weyer * Literary Review * Fascinating * Tatler * The Rich is witty, extremely readable and home to all sorts of enjoyably crazy figures * Observer * The Rich is an absorbing read . . . there is plenty of rich material * The Times * Praise for John Kampfner: One of Britain's most distinguished political writers * Mail on Sunday *

Book Description LITTLE BROWN BOOK GROUP, 2014. Paperback. Condition: Good. Item may show signs of shelf wear. Pages may include limited notes and highlighting. May include supplemental or companion materials if applicable. Access codes may or may not work. Connecting readers since 1972. Customer service is our top priority. Seller Inventory # mon0001991675

3. The Rich: From Slaves To Superyachts A 2000 Year History

Book Description Little, Brown, London, 2014. Paperback. Condition: As New. An unread, unmarked book in as new condition. "With extraordinary tales of Norman knights, Malian kings and Spanish conquistadores through to present-day sheikhs, internet giants, oligarchs and bankers, this is the compelling story of the rise and rise of the very wealth˙ around the world over the past two thousand years. Seller Inventory # 028705