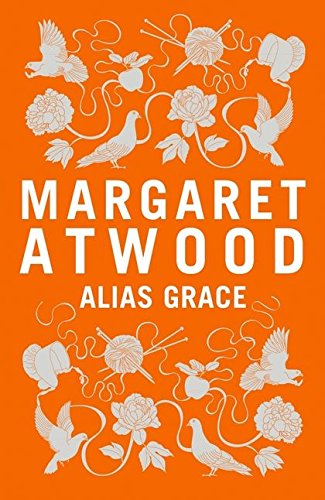 By the author of The Handmaid's TaleSoon to be a major NETFLIX seriesSometimes I whisper it over to myself: Murderess. Murderess. It rustles, like a taffeta skirt along the floor.' Grace Marks. Female fiend? Femme fatale? Or weak and unwilling victim? Around the true story of one of the most enigmatic and notorious women of the 1840s, Margaret Atwood has created an extraordinarily potent tale of sexuality, cruelty and mystery.'Brilliant... Atwood's prose is searching. So intimate it seems to be written on the skin' Hilary Mantel'The outstanding novelist of our age' Sunday Times'A sensuous, perplexing book, at once sinister and dignified, grubby and gorgeous, panoramic yet specific...I don't think I have ever been so thrilled' Julie Myerson, Independent on Sunday

In 1843, a 16-year-old Canadian housemaid named Grace Marks was tried for the murder of her employer and his mistress. The sensationalistic trial made headlines throughout the world, and the jury delivered a guilty verdict. Yet opinion remained fiercely divided about Marks--was she a spurned woman who had taken out her rage on two innocent victims, or was she an unwilling victim herself, caught up in a crime she was too young to understand? Such doubts persuaded the judges to commute her sentence to life imprisonment, and Marks spent the next 30 years in an assortment of jails and asylums, where she was often exhibited as a star attraction. In Alias Grace, Margaret Atwood reconstructs Marks's story in fictional form. Her portraits of 19th-century prison and asylum life are chilling in their detail. The author also introduces Dr. Simon Jordan, who listens to the prisoner's tale with a mixture of sympathy and disbelief. In his effort to uncover the truth, Jordan uses the tools of the then rudimentary science of psychology. But the last word belongs to the book's narrator--Grace herself.

"Alias Grace has all the pacing of a commercial novel and all the resonance of a classic."
--Washington Post Book World

"A stunning novel full of sly wit, compassion and insight, boasting writing that is lyrical, assured, evocative of time and place, and seductive in its power to engage us."
--Houston Chronicle

Book Description Hardback. Condition: Fair. A readable copy of the book which may include some defects such as highlighting and notes. Cover and pages may be creased and show discolouration. Seller Inventory # GOR009483073

Book Description Bloomsbury Publishing PLC. Hardcover. Condition: Good. Connecting readers with great books since 1972. Used books may not include companion materials, some shelf wear, may contain highlighting/notes, may not include cdrom or access codes. Customer service is our top priority!. Seller Inventory # S_265944599

Book Description Bloomsbury Publishing PLC. Condition: Good. A+ Customer service! Satisfaction Guaranteed! Book is in Used-Good condition. Pages and cover are clean and intact. Used items may not include supplementary materials such as CDs or access codes. May show signs of minor shelf wear and contain limited notes and highlighting. Seller Inventory # 1408802791-2-4