Items related to Harry Potter and the Chamber of Secrets: Signature...

Harry Potter and the Chamber of Secrets: Signature Edition 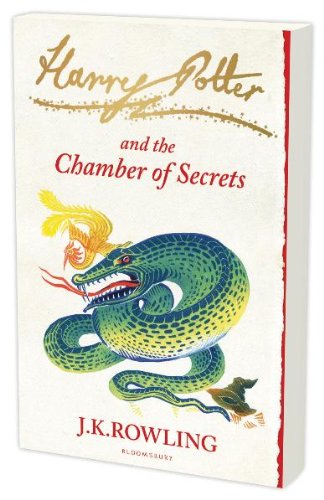 The Dursleys were so mean that hideous that summer that all Harry Potter wanted was to get back to the Hogwarts School for Witchcraft and Wizardry. But just as he's packing his bags, Harry receives a warning from a strange, impish creature named Dobby who says that if Harry Potter returns to Hogwarts, disaster will strike.

And strike it does. For in Harry's second year at Hogwarts, fresh torments and horrors arise, including an outrageously stuck-up new professor, Gilderoy Lockheart, a spirit named Moaning Myrtle who haunts the girls' bathroom, and the unwanted attentions of Ron Weasley's younger sister, Ginny.

But each of these seem minor annoyances when the real trouble begins, and someone--or something--starts turning Hogwarts students to stone. Could it be Draco Malfoy, a more poisonous rival than ever? Could it possibly be Hagrid, whose mysterious past is finally told? Or could it be the one everyone at Hogwarts most suspects...Harry Potter himself?

What makes the Harry Potter series so successful? Maybe it's the fact that J.K. Rowling doesn't write children's books, she writes children's stories, more in the tradition of the Brothers Grimm than Dr. Seuss. The exploits of Harry and his friends captivate even the shortest attention spans by engaging the imagination with vivid characters and fast-moving action, instead of trying to merely catch the eye with colorful pictures or pop-up effects. Not surprisingly, the Potter tales sound wonderful read aloud, and adapt to the audiobook format extremely well. Broadway actor Jim Dale's impressive vocal range gives each character in the book its own distinctive voice--a considerable task, given the pantheon of witches, warlocks, ghosts, ghouls, dwarves, and elves that Harry encounters in his second outing. And thankfully, since the book is read unabridged, no one's favorite character is omitted. Engaging for children without being childish, the audio version of Harry Potter and the Chamber of Secrets is worthy addition to the deservedly popular series. (Running time: 9 hours, 7 CDs) --Andrew Nieland

"Surely the vilest household in children's literature since the family Roald Dahl created for Matilda. Harry himself is the perfect confused and unassuming hero." --School Library Journal, starred review