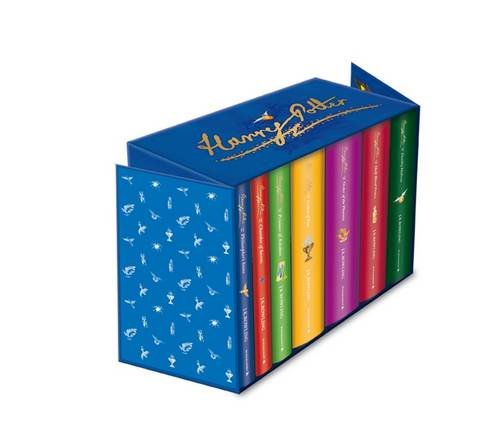 The first opportunity to own all seven Harry Potter titles in hardback in the latest 'Signature' edition livery. All encased in a smart gift box. The books will have stylish marker ribbons and decorated endpapers.

J.K.Rowling has woken up a whole generation to reading * The Times * The Harry Potter books are that rare thing, a series of stories adored by parents and children alike * Daily Telegraph * The most remarkable publishing sensation for a generation . . . the story is told with such momentum, imagination and irrepressible humour that it can captivate both adults and children * Sunday Express * Hooray for Harry Potter . . . [Harry's] adventures are as funny as Roald Dahl's stories and as vivid as Narnia books - and adults seem to enjoy them as much as their children * Daily Mail *

1. Harry Potter and the Philosopher's Stone, Chamber of Secrets, Prisoner of Azkaban, Goblet of Fire, Order of the Phoenix, The Half-Blood Prince, The Deathly Hallows - The Complete Signature Collection - 7 Hardback Set in Slipcase

Shipping: US$ 22.09
From United Kingdom to U.S.A.
Destination, rates & speeds