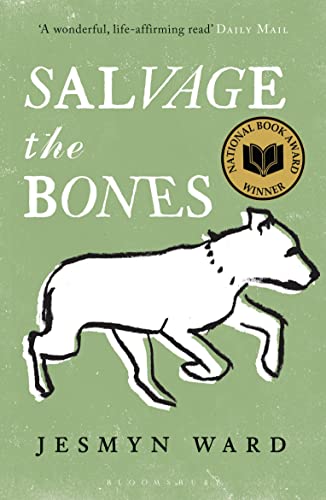 Beautifully written ... A powerful depiction of grinding poverty, where somehow amid the deprivation, the flame of filial affection survives and a genuine spirit of community is able to triumph over everything the system and nature can throw at it * Daily Mail * Masterful... Salvage the Bones has the aura of a classic about it * Washington Post * A brilliantly pacy adventure-story as the family battles to escape the rising tide. The pages fly past with heart-stopping intensity... Ward writes like a dream. A real dream: uneasy, vivid and deep as the sea * The Times * The novel's hugeness of heart and fierceness of family grip hold on like Skeetah's pit bull * Oprah Magazine *

Book Description Condition: Good. A+ Customer service! Satisfaction Guaranteed! Book is in Used-Good condition. Pages and cover are clean and intact. Used items may not include supplementary materials such as CDs or access codes. May show signs of minor shelf wear and contain limited notes and highlighting. Seller Inventory # 140882700X-2-4

Book Description Paperback. Condition: Good. Minor shelf wear Good condition is defined as: a copy that has been read but remains in clean condition. All of the pages are intact and the cover is intact and the spine may show signs of wear. The book may have minor markings which are not specifically mentioned. Most items will be dispatched the same or the next working day. Seller Inventory # wbb0019127619

Book Description Paperback. Condition: Very Good. A hurricane is building over the Gulf of Mexico, threatening the coastal town of Bois Sauvage, Mississippi, and Esch's father is growing concerned. He's a hard drinker, largely absent, and it isn't often he worries about the family. Esch and her three brothers are stocking up on food, but there isn't much to save. Lately, Esch can't keep down what food she gets; at fifteen, she has just realized that she's pregnant. Her brother Skeetah is sneaking scraps for his prized pit bull's new litter, dying one by one. Meanwhile, brothers Randall and Junior try to stake their claim in a family long on child's play and short on parenting. As the twelve days that make up the novel's framework yield to a dramatic conclusion, this unforgettable family - motherless children sacrificing for one another as they can, protecting and nurturing where love is scarce - pulls itself up to face another day. The book has been read, but is in excellent condition. Pages are intact and not marred by notes or highlighting. The spine remains undamaged. Seller Inventory # GOR003578934

Book Description Paperback. Condition: Very Good. Item is in very good condition. If supplemental codes/CDs for textbooks are required please contact us prior to purchasing as they may be missing. Photos are stock pictures and not of the actual item. Seller Inventory # DS-140882700X-2

Shipping: US$ 27.79
From United Kingdom to U.S.A.
Destination, rates & speeds