Items related to Deception: Spies, Lies and How Russia Dupes the West

Deception: Spies, Lies and How Russia Dupes the West 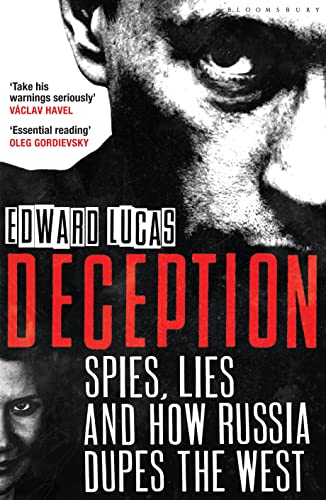 From the capture of Sidney Reilly, the 'Ace of Spies', by Lenin's Bolsheviks in 1925, to the deportation from the USA of Anna Chapman, the 'Redhead under the Bed', in 2010, Kremlin and Western spymasters have battled for supremacy for nearly a century. In Deception Edward Lucas uncovers the real story of Chapman and her colleagues in Britain and America, unveiling their clandestine missions and the spy-hunt that led to their downfall. It reveals unknown triumphs and disasters of Western intelligence in the Cold War, providing the background to the new world of industrial and political espionage. To tell the story of post-Soviet espionage, Lucas draws on exclusive interviews with Russia's top NATO spy, Herman Simm, and unveils the horrific treatment of a Moscow lawyer who dared to challenge the ruling criminal syndicate there. Once the threat from Moscow was international communism; now it comes from the siloviki, Russia's ruthless 'men of power'.

Edward Lucas is a senior editor at the Economist. He has been covering eastern Europe since 1986, with postings in Berlin, Moscow, Prague, Vienna, and the Baltic states. He is married to the columnist Cristina Odone. He is the author of The New Cold War (2008), which has been published in more than 15 languages.

Entertaining and informative ... In the fascinating chapters about the voluptuous Anna Chapman, who was expelled from the US two years ago together with nine other exposed Russian spies, we learn much that is new, especially about her life in London. Lucas contrasts our complacency and delusion with Russia's ruthless ingenuity. * Mail on Sunday * Putin [and] his friends ... are gangsters on a scale that makes Al Capone or the Corleones seem small-time ... Lucas is right to castigate our folly in treating all this so lightly. * Max Hastings, Sunday Times * Well-researched, engaging, and eerie. * Publishers' Weekly * This important book is a sequel to the author's last indictment of the Putin regime, The New Cold War, which came out four years ago. Deception is, if anything, even more devastating. * Standpoint * Urgent and heartfelt. * The Times *

1. Deception: Spies, Lies and How Russia Dupes the West

Shipping: US$ 14.81
From United Kingdom to U.S.A.
Destination, rates & speeds

2. Deception: Spies, Lies and How Russia Dupes the West