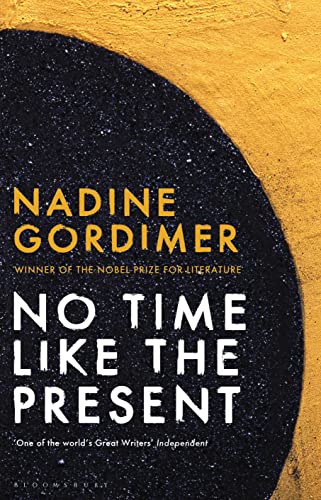 Nadine Gordimer's many novels include The Conservationist, joint winner of the Booker Prize, Get A Life, Burger's Daughter, July's People, My Son's Story and The Pickup. Her collections of short stories include The Soft Voice of the Serpent, Something Out There, Jump, Loot and, most recently, Beethoven Was One-Sixteenth Black. She has also collected and edited Telling Tales, a story anthology published in fourteen languages whose royalties go to HIV/AIDS organisations. In 2010 her nonfiction writings were collected in Telling Times and a substantial selection of her stories was published in Life Times. Nadine Gordimer was awarded the Nobel Prize for Literature in 1991. She lives in South Africa.

There was a Pleistocene Age, a Bronze Age, an Iron Age.

It seemed an Age was over. Surely nothing less than a New Age when the law is not promulgated on pigment, anyone may live and move and work anywhere in a country commonly theirs. Something with the conventional title ‘Constitution’ flung this open wide. Only a grandiose vocabulary can contain the meaning for the millions who had none recognised of the rights that go by the word freedom.

The consequences are many among the aspects of human relationships that used to be restricted by decree. On the tenants’ mailboxes there are some African names: a doctor, a lecturer at a university and a woman making a career for herself in the opportunity of business. Jabulile and Steve could go to the cinema, eat in restaurants, stay in hotels together. When she gave birth to their daughter this was in a clinic where she would not have been admitted—before. It’s a normal life, not a miracle. It was made by human struggle.

He had been interested in science from an early childhood and studied industrial chemistry at university. His parents saw this as at least some hope of antidote, insurance for his future in contrast to the leftist activities against the regime that led to his disappearing apparently over the border somewhere for periods; he would have a respectable profession. They were never to know how useful his knowledge of chemical elements was to the group who were learning how to make explosives for targets such as power installations. When he graduated, the junior post he found in a large paint factory was indeed a useful cover for a suspect way of life, political and sexual.

Ambition. Wasn’t a time, then, to think about what you really might want to do with your life. The compass within swung the needle firmly back to the single pole—until the distortion of human life in common was ended, there was no space for meaning in personal achievement, climb Mount Everest or get rich, all cop-outs from reality, indecent sign of being on the side of no change.

Now there was no reason why he should continue to research advances in the durability of paint for new varieties of construction and decorative purposes, from rooftops to jukeboxes, bedrooms to sports convertibles. He supposed he could have returned to a university to further his knowledge of other branches of chemistry and physics, not confined to appearances. But there was a child for whom he and she had to provide a home. He did his work well anyway without much interest, there was no spice left as there had been in knowing that at the same time as (literally) keeping up appearances for white industry he was making explosives to blow up the regime. The firm had a number of countrywide branches, he was advanced in this one, the headquarters where he had begun. If he didn’t make a decision, as he kept considering, to reconsider test-tube chemistry and move into the other kind, between humans, non-governmental, non-profit making, he worked part-time voluntarily on a commission for land claims of communities dispossessed under the past regime. She studied by correspondence, economics and law, and was volunteer secretary to a women’s action group against woman and child abuse. Their small Sindiswa was in day care; what little time was left they spent with her.

They were sitting on their Glengrove Place balcony just after sunset among the racks of child’s clothes draped to dry. A motorbike ripped the street like a sheet of paper roughly torn.

Both looked up from companionable silence, her mouth slewed, the curve of the brows pencilled on her smooth fore- head flown up. It was time for the news; the radio lay on the floor with his beer. But instead he spoke.

—We should move. What d’you think. Have a house.—

—I’m not talking about buying. Renting a house somewhere.—

She half-circled her head, trying to follow his thought.

—One of the suburbs where whites have switched to town house enclosures. A few comrades have found places to rent.—

—Have you been there?—

—Of course not. But Jake was saying when we were at the Commission on Thursday, they’re renting near a good school where their boys could go.—

—Sindiswa doesn’t need a school.— She laughed and as if in a derisive agreement the child hiccupped over the biscuit she was eating.

—He says the streets are quiet.—

So it is the motorbike that has ripped open the thought.

You never know when you’ve rid yourself of the trappings of outdated life, come back subconsciously: it’s some privileges of the white suburb where he grew up that come to her man now. He doesn’t know—she does—lying in his mind it’s the Reed home whose segregation from reality he has left behind for ever. How could she not understand: right there in the midst of enacting her freedom independence, when one of her brothers, the elder of course, dismisses her opinion of some

family conduct directed by custom, she finds what her studies by correspondence would call an atavistic voice of submission replacing the one in her throat.

He is saying as he lifts Sindiswa flying high on the way to bedtime (fathering is something the older generation, white and black, segregated themselves from)—She’ll need a good school nearby soon enough.—

In the dark, withheld hours of quiet, two, three, in the morning, you don’t know what is going on in the mind-rhythm of the one breathing beside you. Maybe there tore through the unconscious an echo of what prompted the idea that sunset a week—some days—ago.

Jake Anderson calls to ask whether he and Isa had been forgotten lately, would their comrades come by on Sunday— whether this was prompted by he who slept against her, she wasn’t told. Anyway, it meant that they bundled Sindiswa and a couple of bottles of wine into the car and took the free- way to an exit unfamiliar. It debouched on streets brooded over by straggly pepper trees drooping their age and what must be jacarandas, but not in bloom, whose roots humped the pavements. The houses all revealed somewhere in their improvements their origin: front stoep, room ranged on either side under rigid tin roof, although some had additions, sliding glass-fronted, somehow achieved in the space of each narrow plot within walls or creeper-covered fences defining the limit between neighbours. Apparently following Jake’s directions Steve slowed at what appeared to be a small red-brick church peaking among the houses, but as he drove past to take a left turn, revealed a swimming pool contrived where the church porch must have been, and three or four young men or perhaps determinedly youthful older ones, in G-string swimming briefs were dancing and tackling one another in the water to the sound of loud reggae. In the small gardens of other houses there were the expected bicycles, garden chairs and barbeque jumble. Jake’s was one of them. The standard stoep had been extended by a pergola sheltered by a grape vine. There was a car and a motorbike in the street at the gate, a party evidently. Well, no, just a few comrades remembering to get together, out of the different paths their lives were taking.

They’re all young but it’s as if they are old men living in the past, there everything happened. Their experience of life defined: now is everything after. Detention cells, the anecdotes from camp in Angola, the misunderstanding with the Cubans who came—so determinately, idealistically brave— to support this Struggle at the risk of their own lives, the clash of personalities, personal habits in the isolation of cadres, all contained by comradeship of danger, the presence of death eavesdropping always close by in the desert, the bush. Peter Mkize is at this Sunday gathering, taking a hand at expertly turning chops and sausages on the charcoal grill under the grape vine, a beer in the other hand. His brother was one of those who were captured and killed, their dismembered bodies burned at a braaivleis by drunken white South African soldiers and thrown into the Komati River, a frontier between this country and Mozambique. That history, may it not come back to him as he flips over the spitting sausages for the comrades.

Now everything is after.

Steve feels a breath of rejection lifting his lungs. What they did then, some of those present much braver and enduring hell beyond anything he risked, anything Jabu, herself black, inevitable victim, took on—it can’t be the sum of life experience? To close away from this he tosses a personal distraction.

—Jake, where’s the house you were telling me about. Like to have a look at it.—

—Sure, plenty time. Have another glass of this great wine you brought, while the sun goes down.—

Jabulile smiles, the patronage of intimacy. —He has a sudden urge to move.—

—No, but we’ll still be neighbours. It’s a couple of houses down from where you turned to our street.—

—Before that weird-looking place that looks as if it was a church? There were some guys dancing in a mini pool there.—

—Was a church, this is an old ware Boer suburb, no Kaffirs allowed to come to Jesus at the altar of apartheid, blankes alleen.—

Everyone laughing release from the past. Spread hands thrown up and head dr...

Shipping: US$ 12.59
From United Kingdom to U.S.A.
Destination, rates & speeds

Shipping: US$ 16.79
From United Kingdom to U.S.A.
Destination, rates & speeds