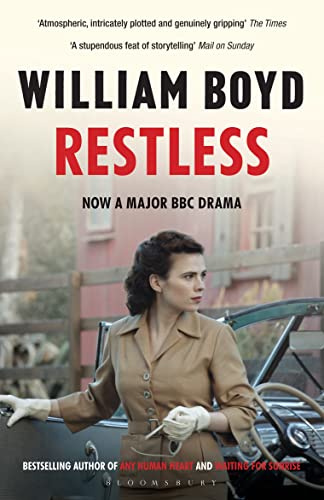 William Boyd is the author of eight novels, including A Good Man in Africa and Any Human Heart, three collections of short stories, and twelve screenplays that have been filmed. He has been the recipient of several awards, including the Whitbread Award for Best First Novel, the John Llewellyn Rhys Prize, the James Tait Black Memorial Prize and the Los Angeles Times Book Prize for Fiction. He lives with his wife in London and southwest France.

Drab English teacher Ruth Gilmartin is astonished when her mother, Sally, reveals that she is really Eva, a Russian ŽmigrŽ recruited by the Brits to manipulate the press to force the U.S. into WWII. Her British spymaster, and lover, Lucas Romer, betrays Eva, and she must assume other identities to escape Romer's death sentence. Incomparable British actress Rosamund Pike plays the two women with compassion and verve as the story follows the parallel lives of mother and daughter. She shows her greatest skill in the climax when she superbly portrays not only Sally and Ruth, but the despicable Romer as well, in a stunning confrontation. M.T.B. 2007 Audies Award Finalist © AudioFile 2007, Portland, Maine-- Copyright © AudioFile, Portland, Maine

Book Description Bloomsbury Publishing PLC, UK. Softcover. Condition: New. First Edition. 336 pages. Available Now. Book Description: It is 1939. Eva Delectorskaya is a beautiful 28-year-old Russian ?migr?e living in Paris. As war breaks out she is recruited for the British Secret Service by Lucas Romer, a mysterious Englishman, and under his tutelage she learns to become the perfect spy, to mask her emotions and trust no one, including those she loves most. Since the war, Eva has carefully rebuilt her life as a typically English wife and mother. But once a spy, always a spy. Now she must complete one final assignment, and this time Eva can't do it alone: she needs her daughter's help. : Review: 'Boyd is English fiction's master storyteller . Restless is that rare thing: a spy thriller from a first-rate narrative intelligence' (Independent on Sunday): 'Fast moving, densely plotted, beautifully observed and probably one of the best things Boyd has done' (Esquire): 'A good, rollicking read . pulls you deep in to the obscure, forgotten intricacies of wartime espionage . will keep you turning pages until the end' (Observer): 'Heart-stoppingly exciting . a riveting tale of wartime derring-do' (Time Out) : Book Description: The Richard & Judy bestseller, the BBC TV series is now available on DVD Size: 12.9 x 2.1 x 19.8 cm. 336 pages. Multiple copies available this title. Quantity Available: 8. Category: Fiction; Paperback; ISBN: 1408835185. ISBN/EAN: 9781408835180. Inventory No: F232-1011. 22 years of serving customers on ABE. A seller you can rely on. Seller Inventory # F232-1011