Items related to The Signature of All Things

Gilbert, Elizabeth The Signature of All Things

The Signature of All Things 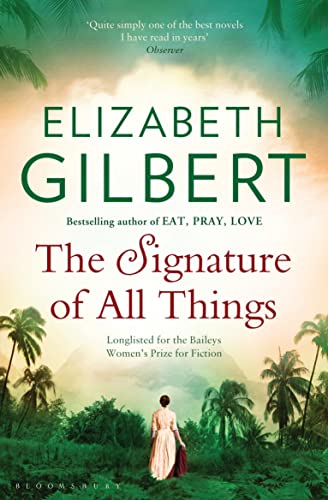 Elizabeth Gilbert is the acclaimed author of five books of fiction and non-fiction, including Eat, Pray, Love, Stern Men, The Last American Man and Committed.

1. The Signature of All Things

3. Signature of All Things

4. The Signature of All Things

5. The Signature of All Things

Book Description Bloomsbury Trade Jun 2014, 2014. Taschenbuch. Condition: Neu. Neuware - LONGLISTED FOR THE BAILEYS WOMEN'S PRIZE FOR FICTION SHORTLISTED FOR THE WELLCOME BOOK PRIZE From the moment Alma Whittaker steps into the world, everything about life intrigues her. Instilled with an unquenchable sense of wonder by her father, a botanical explorer and the richest man in the New World, Alma is raised in a house of luxury and curiosity. It is not long before she becomes a gifted botanist in her own right. But as she flourishes and her research takes her deeper into the mysteries of evolution, the man she comes to love draws her in the opposite direction - into the realm of the spiritual, the divine and the magical. The Signature of All Things soars across the globe of the nineteenth century, from London and Peru, to Philadelphia, Tahiti and beyond. Peopled with extraordinary characters along the way, most of all it has an unforgettable heroine in Alma Whittaker. 592 pp. Englisch. Seller Inventory # 9781408850046