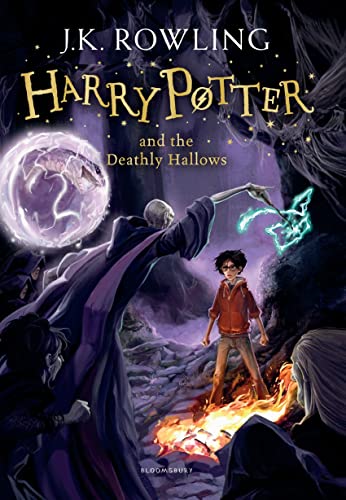 Harry Potter and the Deathly Hallows

Deluxe Edition Details
The Deluxe Edition includes an exclusive insert featuring near-scale reproductions of Mary GrandPré's interior art, as well as never-before-seen full-color frontispiece art on special paper. The custom-designed slipcase is foil-stamped and contains a full-cloth case book that has been blind-stamped on front and back cover with foil stamping on the spine. The book includes full-color endpapers featuring the jacket art from the trade edition and a wraparound jacket featuring art created especially for this edition by Mary GrandPré.

"I am an extraordinarily lucky person, doing what I love best in the world. I’m sure that I will always be a writer. It was wonderful enough just to be published. The greatest reward is the enthusiasm of the readers." --J.K. Rowling

2. Harry Potter and the Deathly Hallows

3. Harry Potter And The Deathly Hallows

4. Harry Potter And The Deathly Hallows

Book Description 2014. Paperback. Condition: New. Paperback. Harry Potter is preparing to leave the Dursleys and Privet Drive for the last time. But the future that awaits him is full of danger, not only for him, but for anyone close to him - and Ha.Shipping may be from multiple locations in the US or from the UK, depending on stock availability. 640 pages. 0.520. Seller Inventory # 9781408855713

6. Harry Potter and the Deathly Hallows

7. Harry Potter and the Deathly Hallows

9. Harry Potter and the Deathly Hallows