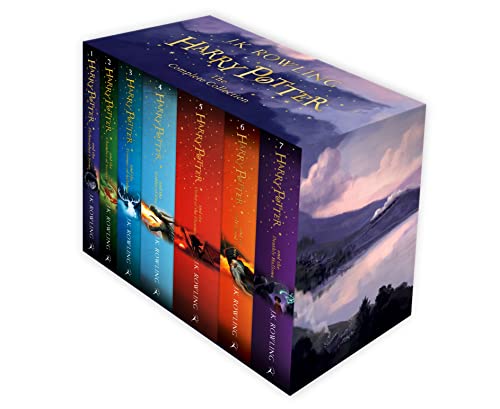 It's time to pass the magic on – with brand new children's editions of the classic and internationally bestselling series.

Book Description Paperback. Condition: NEW. International Edition, Brand New, ISBN and Cover same but contents similar to U.S. Edition, Printed in Black & White. End Chapter Exercises may differ. No CD/Access code. Legal to use despite any disclaimer, We do not ship to PO , APO and FPO adresses.Choose Expedited Shipping for FASTER DELIVERY within 4-5 business days.Customer Satisfaction Guaranteed. Seller Inventory # IN_9781408856772

Book Description 2014. Paperback. Condition: New. Boxed Set. Paperback. These new editions of the classic and internationally bestselling, multi-award-winning series feature instantly pick-up-able new jackets by Jonny Duddle, with huge child appeal, to bring H.Shipping may be from multiple locations in the US or from the UK, depending on stock availability. 3422 pages. 3.350. Seller Inventory # 9781408856772

Book Description 2014. Paperback. Condition: New. Boxed Set. Paperback. These new editions of the classic and internationally bestselling, multi-award-winning series feature instantly pick-up-able new jackets by Jonny Duddle, with huge child appea.Shipping may be from our Sydney, NSW warehouse or from our UK or US warehouse, depending on stock availability. 3422 pages. 3.350. Seller Inventory # 9781408856772

Book Description Bloomsbury Academic, 2014. Condition: new. London, 2014; hardback, cm 15x21. It's time to pass the magic on to the next generation of readers. This boxed set contains the 7 new paperback editions, with child-friendly design and artwork by Jonny Duddle. Foiled titles with numbered spines add to the gift appeal. Seller Inventory # 2897758