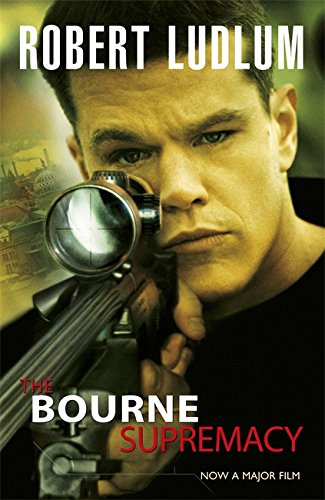 A KILLER WITH NO FACE, NO IDENTITY, AND A NAME THE WORLD WANTED TO FORGET:
JASON BOURNE

Reenter the shadowy world of Jason Bourne, an expert assassin still plagued by the splintered nightmares of his former life. This time the stakes are higher than ever. For someone else has taken on the Bourne identity—a ruthless killer who must be stopped or the world will pay a devastating price. To succeed, the real Jason Bourne must maneuver through the dangerous labyrinth of international espionage—an exotic world filled with CIA plots, turncoat agents, and ever-shifting alliances—all the while hoping to find the truth behind his haunted memories and the answers to his own fragmented past. This time there are two Bournes—and one must die.
From the Paperback edition.

In a Kowloon Cabaret, scrawled in a pool of blood, is a name the world wanted to forget: Jason Bourne.

The Chinese vice-premier has been brutally slain by a legendary assassin. World leaders ask the same fearful questions: Why has Jason Bourne come back? Who is paying him? Who is the next to die? But U.S. officials know the shocking truth: There is no Jason Bourne. The name was created as cover for David Webb on his search for the notorious killer Carlos. Someone else has taken the Bourne identity--and unless he is stopped, the world will pay a devastating price. So Jason Bourne must live again. Once again, Webb must utilize his lethal skills--because once again, like a nightmare relived, the woman he loves is suddenly torn from his life. To find her, trap his own impostor, and uncover an explosive secret plan, Webb must lauch a desperate oddyssey into the espionage killing fields. But this time, survival will not be enough. This time Bourne must reign supreme.
From the Paperback edition.

Book Description -. Paperback. Condition: Very Good. The Bourne Supremacy (Jason Bourne) This book is in very good condition and will be shipped within 24 hours of ordering. The cover may have some limited signs of wear but the pages are clean, intact and the spine remains undamaged. This book has clearly been well maintained and looked after thus far. Money back guarantee if you are not satisfied. See all our books here, order more than 1 book and get discounted shipping. Seller Inventory # 7719-9781409109716

Book Description Paperback. Condition: Very Good. The book has been read, but is in excellent condition. Pages are intact and not marred by notes or highlighting. The spine remains undamaged. Seller Inventory # GOR007323817

Book Description Paperback. Condition: Good. The book has been read but remains in clean condition. All pages are intact and the cover is intact. Some minor wear to the spine. Seller Inventory # GOR005465999

Book Description Paperback. Condition: Fair. A readable copy of the book which may include some defects such as highlighting and notes. Cover and pages may be creased and show discolouration. Seller Inventory # GOR010096239

Shipping: US$ 9.94
From United Kingdom to U.S.A.
Destination, rates & speeds