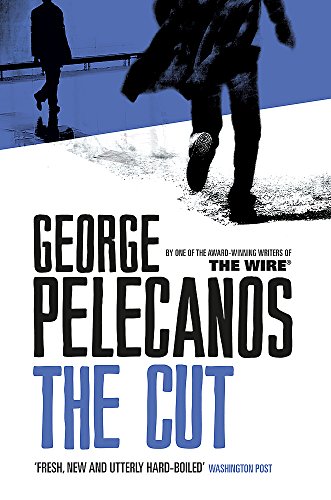 Spero Lucas has a new line of work. Since he returned home after serving in Iraq, he has been doing special investigations for a defence attorney. He's good at it, and he has carved out a niche: recovering stolen property, no questions asked. His cut is forty percent. A high-profile crime boss who has heard of Lucas's speciality hires him to find out who has been stealing from his operation. It's the biggest job Lucas has ever been offered, and he quickly gets a sense of what's going on. But before he can close in on what's been taken, he tangles with a world of men whose amorality and violence leave him reeling. Is any cut worth your family, your lover, your life? Spero Lucas is George Pelecanos's greatest creation, a young man making his place in the world one battle and one mission at a time. The first in a new series of thrillers featuring Spero Lucas, The Cut is the latest confirmation of why George Pelecanos is 'perhaps the greatest living crime writer.' (Stephen King)

George Pelecanos was born in Washington, D.C. in 1957. He worked as a line cook, dishwasher, bartender, and woman's shoe salesman before publishing his first novel in 1992. Pelecanos is the author of twenty books set in and around Washington, D.C.: A Firing Offense, Nick's Trip, Shoedog, Down By the River Where the Dead Men Go, The Big Blowdown, King Suckerman, The Sweet Forever, Shame the Devil, Right as Rain, Hell to Pay, Soul Circus, Hard Revolution, Drama City, The Night Gardener, The Turnaround, The Way Home, The Cut, What It Was, The Double, and The Martini Shot. He has been the recipient of the Raymond Chandler award in Italy, the Falcon award in Japan, and the Grand Prix Du Roman Noir in France. Hell to Pay and Soul Circus were awarded the 2003 and 2004 Los Angeles Times Book Prizes. The Turnaround won the Hammett Prize for literary excellence in the field of crime writing. His fiction has appeared in Playboy, Esquire, and the collections Unusual Suspects, Best American Mystery Stories of 1997, Measures of Poison, Best American Mystery Stories of 2002, Men From Boys, and Murder at the Foul Line. He served as editor on the collections D.C. Noir and D.C. Noir 2: The Classics, as well as The Best Mystery Stories of 2008. He is an award-winning essayist who has written for The New York Times, The New Yorker, The Washington Post, GQ, Sight and Sound, Uncut, Mojo, and numerous other publications. Esquire magazine called him "the poet laureate of the D.C. crime world." In Entertainment Weekly, Stephen King wrote that Pelecanos is "perhaps the greatest living American crime writer." Pelecanos would like to point out that Mr. King used the word "perhaps." Pelecanos was a producer, writer, and story editor for the acclaimed HBO dramatic series, The Wire, winner of the Peabody Award, the AFI Award, and the Edgar. He was nominated for an Emmy for his writing on that show. He was a writer and co-producer on the World War II miniseries The Pacific, produced by Steven Spielberg, and most recently worked as a writer and Executive Producer on the HBO series Treme. Pelecanos lives in Silver Spring, Maryland. He is at work on his next novel.

He's best known for writing acclaimed US TV show The Wire. But George Pelecanos has spent many years penning brilliant but under-appreciated crime novels set in Washington DC ... the dialogue, characters and sense of location are superb. Pelecanos is a Cut above the rest. -- Natasha Harding * THE SUN * George Pelecanos writes hard-boiled fiction with heart * SUNDAY TELEGRAPH * Pelecanos, heir to Elmore Leonard's throne, has landed another short, sparkling masterpiece. What's more, The Cut is just the beginning of a planned series for tough, streetwise, mother's boy Spero Lucas. * THE MIRROR * The language, like the action, is brutal, fast and hard ... Stephen King describes Pelecanos as 'perhaps the greatest living crime writer' and The Cut certainly marks him out as a name to watch. In fact, he may just come to give Ellroy and Leonard a run for their money in the hard-boiled stakes. * DAILY MAIL * Pelecanos keeps readers on their toes with with a series of twists that confound stereotypes, drilling the plot along with breakneck prose, sassy dialogue and even shifting into a serious analysis at modern society in all its flawed glory. Exceptional. * THE BIG ISSUE * This is gold-standard character-driven crime writing that few will ever match. I can't wait for the sequel. -- Christopher Fowler * FINANCIAL TIMES * expertly crafted writing, pop-culture references ... and a plot that keeps twisting to the dramatic finale. * SHORTLIST * a bloody, brooding thriller of rare authenticity. -- Mark Sanderson * EVENING STANDARD * Pelecanos is incapable of writing a book that isn't gripping, and the dialogue is of a brilliance comparable only with Elmore Leonard and George V Higgins. * THE TIMES * As you'd expect from a writer with credit for both The Wire and Treme, Pelecanos expertly renders the streets of the US capital and succeeds where many have failed of late: creating a fully formed antihero whom readers will want to meet again. * SHORTLIST *

Book Description Orion, 2011. Hardcover. Condition: Used; Good. **Simply Brit** Shipped with Premium postal service within 24 hours from the UK with impressive delivery time. We have dispatched from our book depository; items of good condition to over ten million satisfied customers worldwide. We are committed to providing you with reliable and efficient service at all times. Seller Inventory # 1234451

Book Description Orion, 2011. Hardcover. Condition: Used; Good. **SHIPPED FROM UK** We believe you will be completely satisfied with our quick and reliable service. All orders are dispatched as swiftly as possible! Buy with confidence!. Seller Inventory # mon0002119192

Book Description Orion 25/08/2011, 2011. Condition: Good. Will be shipped promptly from UK warehouse. Book is in good condition with no missing pages, no damage or soiling and tight spine. There may be some dog-eared pages showing previous use but overall a great book. Seller Inventory # 9053-9781409114567

Book Description Orion 25/08/2011, 2011. Condition: Very Good. This book is in very good condition and will be shipped within 24 hours of ordering. The cover may have some limited signs of wear but the pages are clean, intact and the spine remains undamaged. This book has clearly been well maintained and looked after thus far. Money back guarantee if you are not satisfied. See all our books here, order more than 1 book and get discounted shipping. . Seller Inventory # 7719-9781409114567

Book Description Orion 25/08/2011, 2011. Hardcover. Condition: Very Good. Shipped within 24 hours from our UK warehouse. Clean, undamaged book with no damage to pages and minimal wear to the cover. Spine still tight, in very good condition. Remember if you are not happy, you are covered by our 100% money back guarantee. Seller Inventory # 6545-9781409114567

Book Description Orion, 2011. Condition: Good. A+ Customer service! Satisfaction Guaranteed! Book is in Used-Good condition. Pages and cover are clean and intact. Used items may not include supplementary materials such as CDs or access codes. May show signs of minor shelf wear and contain limited notes and highlighting. Seller Inventory # 1409114562-2-4