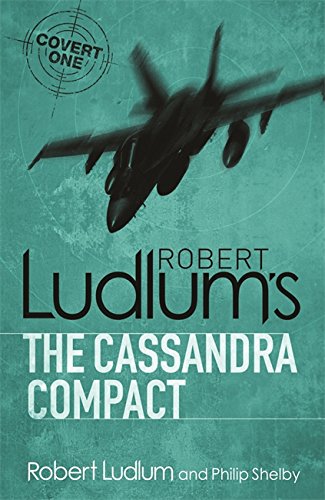 Yuri Danko, an officer in the medical division of Russia's security service, is murdered in a spray of assassin's bullets. Now Covert-One's Jon Smith has Danko's classified papers, and he's unearthed a terrifying global conspiracy. A Serb terrorist has been despatched from Russia to smuggle hazardous vials of a deadly bacteria into the United States. His mission: to deliver them to an unknown US government agent. Then both men are murdered, and the deadly bacteria is stolen...It's up to Lt Col. Smith to find the madman who possesses it, before he holds a defenseless world hostage with the power to render the human race extinct.

Covert-One, the president's personal, super-secret agency formed after some recent virus-driven chaos (The Hades Factor, cowritten with Gayle Lynds), is staffed by an unknown number of international covert operatives, including Dr. Jon Smith, late of the USAMRIID. And a good thing, too, because someone's helped themselves to Russia's share of the world's last two stores of the smallpox virus, an eradicated yet hideously deadly bug with no ready vaccine.

That the pox was nabbed and who nabbed it is clear enough early on. Why such a seemingly large and disparate cadre of global citizens (keeping the players straight puts one in mind of Abbott and Costello's "Who's on First" routine) chose to pinch the bug and for what end are the novel's driving questions. Freelance Serbian uber-nasty, Ivan Beria, is among the apparent perpetrators as are Dylan Reed and Adam Treloar of NASA, Tony Price, the head of the super- secret NSA, and a bunch of Russians. The good-guys roster claims Smith; Covert- One's head, Nathaniel Klein; Briton and ex-SAS man, Peter Howell; Smith's deceased girlfriend's sister and CIA operative, Randi Russell; the girlfriend's best friend, backup shuttle astronaut Megan Olson; and another bunch of Russians. Suffice it to say that Smith and company trot the globe, cat-and- mousing after the pox and in so doing careen through a classically speedy and Ludlumesque (if coincidence dependent) plot leaving large numbers of efficiently dispatched corpses in their wake.

Most authors of international thriller-mysteries would give their right trench coat to make The New York Times® Best Sellers list. Of the late Robert Ludlum's 21 novels, 21 have resided upon that list. Where The Cassandra Compact, written with bestselling thriller author Philip Shelby (Gatekeeper, etc.), winds up is anyone's guess, but a few hundred thousand nightstands is a good place to start. And stay tuned for more installments--Ludlum may be dead, but he's not done yet. --Michael Hudson

The #1 bestselling master of suspense and international intrigue continues to set the standard against which all other thrillers are measured with his expertly plotted, pulse-pounding Covert-One series.

What they're going to do, I never would have believed it...These were among the final words spoken by Yuri Danko, an officer in the medical division of Russia's security service, before his body was ripped apart by a spray of assassins' bullets. Danko's confidential appointment in Venice with Covert-One operative Jon Smith might have ended in death―but his secret didn't die with him...

"Reading a ludlum novel is like watching a james bond film...slickly paced...all-consuming."―Entertainment Weekly

Now, in possession of Danko's classified papers, Smith and CIA undercover agent Randi Russell have unearthed a terrifying global conspiracy. A Serb terrorist, backed by Russians, is on a mission to spirit hazardous vials of deadly bacteria to a U.S. government agent―a shadowy figure whose motives for acquiring the bioweapon are made all the more unfathomable when both men are found murdered―and the strain is stolen. Time is running out for Smith and Russell to track it down, find the madman who possesses it, and stop him before he holds a defenseless world hostage with the power to render the human race extinct.

1. The Cassandra Compact (Covert One 2)