Items related to Live to Tell 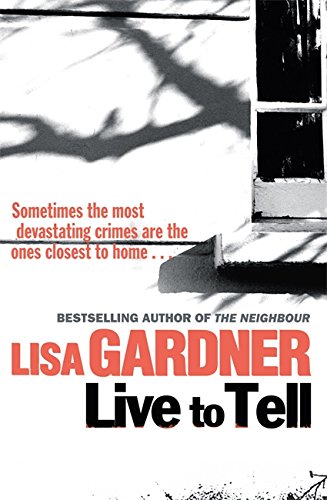 Danielle often thinks about that night when her childhood her ended. The sound of her father shooting her mother and then hunting down her brother, as she cowered under her duvet, trying to drown it all out. She can remember the sound her brother made as he was killed. And she can remember her father standing in the doorway of her bedroom, saying 'I'm sorry, Danielle...' before he turned the gun on himself. Haunting enough for any child, but Danielle has always wondered, why not her too? Why did her father let her go? Years later, Danielle is working in a hospital that deals with the most violent and damaged of children. But someone there knows something about her past - and is prepared to kill to keep it quiet...

Lisa Gardner: D.D.--What do you find most fascinating/frustrating about working with the new guy, crime scene expert Alex Wilson?
D.D.: Alex seems sharp. Knows his blood spatter--I respect that in a guy. ‘Course, he’s been teaching at the Academy, which is one thing, while we’re now standing in a Dorchester home with five dead and carnage in every room. I don’t want lectures, I want results. This was a family--according the neighbors, even a nice family who seemed to actually like one another. Until, of course, the father snapped and killed them all. Or did he? These are the kinds of questions I gotta ask, and Prof Alex better be ready to answer.

LG: When did you know you were going to have your own novel?
D.D.: First time I walked on scene in Alone. Please, I’m five times tougher than fellow detective Bobby Dodge and twenty times smarter. Plus, I look damn good in Jimmy Choos. Let’s see the former sniper do my job in my heels, then we’ll talk.

LG: What's the most difficult case you've ever had to handle? Why?
D.D.: These past two family homicides. For one thing, any crime involving kids wrecks you a little. For another...I don’t believe in coincidence. Here are two families, totally different neighborhoods, socioeconomics, lifestyles, etc., yet they both wind up the same way, dead. Now, what are the odds of two totally different fathers going whacko in exactly the same way? I don’t believe it, but my boss isn’t into gut feel. All comes down to evidence. I would like some. Really, it would be nice right about now. Yo, Alex...

LG: What is the thing you love most about being a Boston P.D. Sergeant?
D.D.: Being in charge, calling all the shots, being the boss. Did I mention being in charge?

LG: What's on your nightstand? What's in the drawer?
D.D.: On my nightstand--back issue of the FBI Law Enforcement Bulletin I keep meaning to read. In the drawer--emergency stash of chocolate, couple of condoms (don’t I wish), and a Kindle loaded up with the latest J.R. Ward steamy hot, seriously action-packed vampire novel. Tell anyone, and they will never find your body.

LG: Favorite food?
D.D.: I’ve always been partial to Italian. Which my squadmate Phil, told Alex all about. Now, Alex claims to be a serious Italian cook--apparently his mother is a Capozzoli and they know their Bolognese. A little wine, a little homemade pasta, a little tiramisu. All I gotta do is pick up the phone, tell him a time and date...one phone call. How hard can that be? One little call.

LG: You drive that butch police car all day. What's your idea of a dream ride?
D.D.: Walking on a beach. No car, no pager, no shoes. Just me, the wind, the waves and the cry of the gulls. I’d probably go nuts within minutes, but it would be nice to give peace a chance.

LG: Can you ever see yourself partnering successfully with another cop? Or are you the quintessential lone wolf?
D.D.: Excuse me, I love my squad and my squad loves me. Neil is one of the finest detectives around, plus better him than me viewing all the autopsies. And Phil--hey, family man, great wife, four kids, works in homicide to escape the violence. Gotta love Phil. They have my back and I have theirs. Life is good.

LG: I'm a woman traveling alone, staying in a hotel. What are your top three tips to keep me safe from psychos?
D.D.: Most hotel crimes have to do with property theft. Unfortunately, a guest walking in on a burglary, or a thief breaking in assuming the room’s vacant only to find a guest present, can lead to violence. Thus, your best defense is to always use the deadbolt, and always advertise when you’re “home,” so to speak.

LG: Do you have any scars?
D.D.: Maybe, but you should see the other guy. Give as good as you get, that’s always been my motto.

LG: What's the most you've ever spent on a pair of shoes? Describe!
D.D.: Silver sequined Jimmy Choos, on sale $500. Should never have bought them, but they’re really pretty and when I wear them, I don’t look like a cop, walk like a cop, or think like a cop. How does that commercial go...? Oh yeah, priceless.

LG: Tell me something I don't know about you.
D.D.: I like mobiles. Don’t ask me why. But there’s something cool about looking up and watching the various shapes and colors slowly twist around. Sometimes, after a really bad day, I go home, close my eyes and create mobiles in my head--maybe one with bright origami animals, or another with silver geometric shapes. I let them go round and round, til finally I can sleep. Then when I wake up, I’ll know something critical about the crime--a piece of the puzzle I missed the day before, a clue I’d overlooked. I think it’s from focusing on patterns. That’s what crimes are, really--very violent patterns that a good detective must deconstruct, then rebuild in her head.

LG: Worst crime scene?
D.D.: The mummified remains of six girls on the grounds of the abandoned mental institute in Mattapan. Never saw anything like it, never want to again. Funny, that was Bobby Dodge’s first case as a detective (Hide)--got him a wife, and now a baby girl. But he never talks about it, and neither do I. Sometimes, finding justice for the victims isn’t enough, but it’s all we got. So a good detective walls it up, puts a Do Not Disturb Sign on that section of memory and walks away. Gotta in this job, or you’ll go mad.

LG: What do you wish you knew five years ago?
D.D.: Can a working woman have it all? Five years ago, I sweated my job. I worried I wasn’t working smart enough, closing cases fast enough. Now, I sweat my entire life. Am I working too hard? Missing out on other parts of life? Maybe I should take Alex up on his offer of homemade alfredo, except can I really be the detective I need to be, while trying to be the girlfriend I’d like to be? Can’t figure it out. So I wish that I’d realized five years ago, how good I had it. That focusing only on my policing career was a luxury I’d never have again. Spoken like a true workaholic, huh?