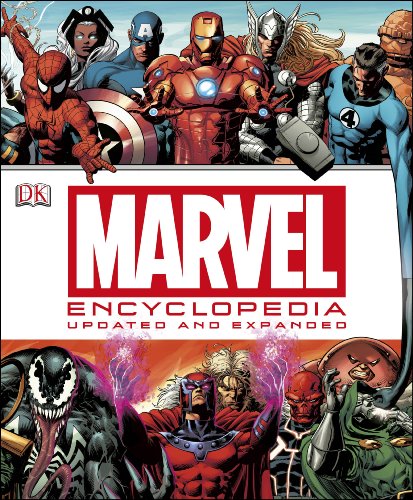 The definitive guide to the characters of the Marvel Universe Are you fascinated by comic books and obsessed with super heroes? The bestselling Marvel Encyclopedia gives you the definitive details and histories of more than 1,200 of Marvel's most memorable characters. Now updated to include expanded entries for Spider-Man, Wolverine, X-Men, Iron Man, Captain America, Hulk and the Avengers, this unique A-Z lets you get closer to your favourite Marvel super heroes. You can find out about 50 exciting new characters, such as Odin and Doctor Nemesis, and all the latest important events in the Marvel universe, such as the Dark Reign, Avengers Vs X-Men and the Age of Ultron. Each super hero explodes from the page with original art from Marvel Comics' finest artists and facts from a team of top Marvel comic book writers. Experience the power of the Marvel super heroes with the revised and updated Marvel Encyclopedia (previous ISBN 9781405344357)- it packs a knock-out punch for all Marvel fans.

Matt Forbeck has been writing and designing games, novels, comics, and more for more than 20 years. His recent work includes Blood Bowl: Killer Contract, Mutant Chronicles, More Forbidden Knowledge, The Complete Idiot's Guide to Drawing Superheroes & Villains, the Harvey Birdman: Attorney at Law video game, and Marvel Heroes Battle Dice.Daniel Wallace is the New York Times bestselling author of Star Wars: The New Essential Guide to Characters, as well as more than a dozen other science-fiction guidebooks. He updated DK's Star Wars: The Ultimate Visual Guide and was an author on both The DC Comics Encyclopedia and The Marvel Encyclopedia. He is also a regular contributor to Star Wars Insider magazine. Daniel is an avid comic book reader and genre fan.

Book Description DK Children, 2014. Hardcover. Condition: Used; Good. **Simply Brit** Shipped with Premium postal service within 24 hours from the UK with impressive delivery time. We have dispatched from our book depository; items of good condition to over ten million satisfied customers worldwide. We are committed to providing you with reliable and efficient service at all times. Seller Inventory # 2768015

Book Description Paperback. Condition: Very Good. The book has been read, but is in excellent condition. Pages are intact and not marred by notes or highlighting. The spine remains undamaged. Seller Inventory # GOR006438087