Items related to The Rough Guide to Spain (Rough Guides) 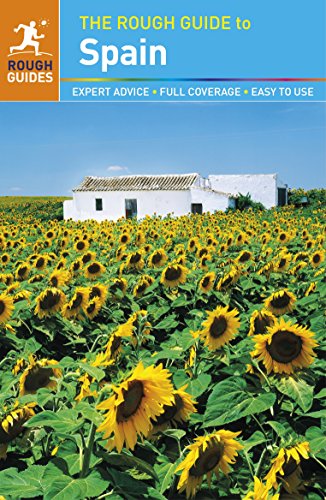 The Rough Guide to Spain is the definitive guide to this captivating country, with in-depth coverage of everything from its classic cities to hidden island beaches.

The introduction will help you choose where to go and what to see, inspired by dozens of stunning photos. The Things Not To Miss section runs through all the must-sees, while the Itineraries guide you around the country's highlights. Navigation through the book and on the ground is aided by clear color maps with every chapter. Each map is keyed with all the accommodation, eating and drinking options, nightlife venues and shops that are reviewed in detail in the Listings chapters.

With stunning photography to inspire you and clear maps to steer you, The Rough Guide to Spain will ensure you discover the best of Spain, whether it's ticking off Gaudí's stunning architectural masterpieces in Barcelona, hiking in the magnificent Picos de Europa, admiring Granada's splendid Alhambra, or taking part in one of the country's fabulously vibrant fiestas. Insider reviews reveal the best places to eat, sleep and party with something for every budget, whether you want to stay in a majestic parador, sip sherry in Jerez, bar-hop in Madrid or nab a table at one of Catalunya's hottest restaurants.

Make the most of your time with The Rough Guide to Spain.

Joanna Styles is a freelance copywriter who has written on such diverse subjects as business, fashion, and travel. Some of her books include Culture Wise Spain, Retiring in Spain, and Living and Working in the European Union. Styles has written articles, brochures, video scripts, and Web copy.

WHERE TO GO: SOME HIGHLIGHTS

The identity and appeal of each of the regions is explored in the chapter introductions, and, if you’re travelling around, there’s a lot to be said for concentrating on one or two provinces, getting a feel for their individuality and character. If you want a broader sweep, though, definite highlights of Spanish travel include:

BARCELONA. The Catalan capital is a must for the fantasy architecture of Antoni Gaudi; the great promenading street of the Ramblas; the Picasso museum; designer clubs and nightlife, par excellence; and, not least, FC Barcelona – the football team.

MADRID is not as pretty as Barcelona, by a long way, but has an irrepressible style and fantastic bars, both traditional and modern, plus three of Spain’s top art galleries – the Prado, the Museo Thyssen-Bornemisza, and the Centro Reina Sofía.

SEVILLA. Home of flamenco and all the clichés of the Spanish south; beautiful city quarters and major Christian and Moorish monuments; extraordinary festivals in Easter week, and, afterwards, at the April feria.

TOLEDO. Capital of medieval Spain and stunningly preserved, with synagogues, former mosques and an amazing cathedral; also houses a number of works by El Greco.

MOORISH MONUMENTS. The best are in the Andalucian cities: the Alhambra palace in Granada, perhaps the most sensual building in Europe; the Mezquita, a former mosque, in Cordoba; and the Alcazar and Giralda tower in Sevilla.

CATHEDRALS, CHURCHES AND MONASTERIES. A tour of the top five Gothic cathedrals will take you through the Castilian cities of Toledo, Leon, Burgos, Salamanca and Segovia. Gorgeous Romanesque churches are to be found along the pilgrim route to Santiago, particularly in the Pyrenees, whilst Oviedo and the province of Asturias are home to the unique pre-Romanesque style. The façade of the great Santiago de Compostela is the highpoint of Spanish Baroque, Aragon has superb Mudejar (Moorish-crafted) churches and towers, and the palace-monastery of El Escorial is the greatest expression of the late Renaissance in Spain.

BEACHES. There is a lot more to Spanish beaches than the over-developed costas. Excellent and much less frequented strands are to be found around Cadiz and Almería in the south, and along the Asturian and Galician coasts in the north. If you want action and nightlife, it’s hard to beat the island of Ibiza, one of the clubbing capitals of the world.

ROMAN SITES. Mérida has the most significant sites and a superb museum; Segovia’s aqueduct is stunning; other rewarding Roman ruins and sites include Italica (near Sevilla), Carmona, Tarragona and Empuries.

TREKKING. Key areas are the Picos de Europa in Cantabria and Asturias, and the Pyrenees, which spread across Euskadi, Aragon (where you’ll find perhaps the best areas) and Catalunya.

WILDLIFE AND NATIONAL PARKS. Favourite parks include Monfrague (in Extremadura) and Ordesa (in the Aragonese Pyrenees). For more details, see the Contexts section of this book.

Overall, spring and autumn are ideal times for a trip – though the weather varies enormously from region to region. The high plains of the centre suffer from fierce extremes, stiflingly hot in summer, bitterly cold and swept by freezing winds in winter. The Atlantic coast, in contrast, has a temperate pattern with depressions rolling in off the ocean, a permanent tendency to damp and mist, and a relatively brief, humid summer. The Mediterranean south is warm virtually all year round, and in parts of Andalucia positively subtropical, attracting off-season visitors even in December.

In high summer the other factor worth considering is tourism itself. Spain plays host to some thirty million tourists a year – one for every resident – and all the better-known resorts are packed from June to September, as are the major sights. August, Spain’s own holiday month, sees the coast at its most crowded and the cities, by contrast, half-empty – and half-closed. Whatever time of year, though, smaller, inland towns see few visitors, and, as noted above, there are beaches beyond the major holiday costas. There’s no need to feel trapped.