Items related to The Robert Langdon Collection (Set of 4 Volumes) 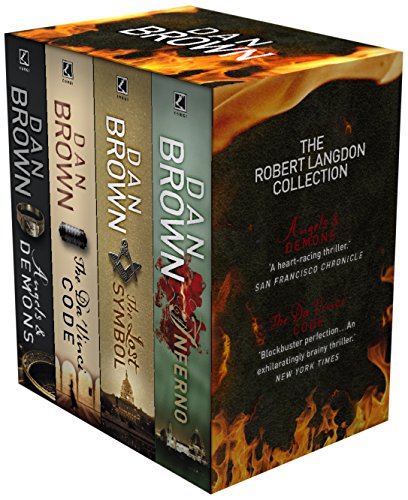 Summary of the Books Angels and Demons Robert Langdon is a symbologist teaching at Harvard. His calm life of academia is interrupted when a CERN scientist is found murdered with a strange symbol seared on his chest. The symbol ties the murder with the Vatican. However, the Vatican is already abuzz as the College of Cardinals is electing the new Pope. What the cardinals don't realize is that there is a deadly explosive beneath them, waiting to go off. If Langdon can't decipher the clues in time, Vatican City will burn. The Da Vinci Code Jacques Sauničre, the curator of the Louvre, was found murdered in the museum. He was found next to a pentagram he drew with his own blood. Robert Langdon joins Sauničre's granddaughter in a wild chase for a dangerous secret, one connecting Sauničre to an ancient secret society once headed by Isaac Newton and Botticelli. The Lost Symbol Robert Langdon's lecture at the Capitol Building is cancelled when a shocking object is found there. Langdon discovers a plot surrounding the masons, and his mentor, Peter Solomon is kidnapped. Langdon's only hope to find him is a mysterious summons into an ancient world of wisdom. Inferno Langdon wakes up in a hospital bed with no recollection of why he's there. He thinks he's still in America. He has no idea how wrong he is or how the mysterious object hidden in his belongings got there. About Dan Brown Dan Brown is an American novelist also known for Deception Point and Digital Fortress. The Robert Langdon series is being adapted into movies starring Tom Hanks. The first two books in the series have already been adapted.