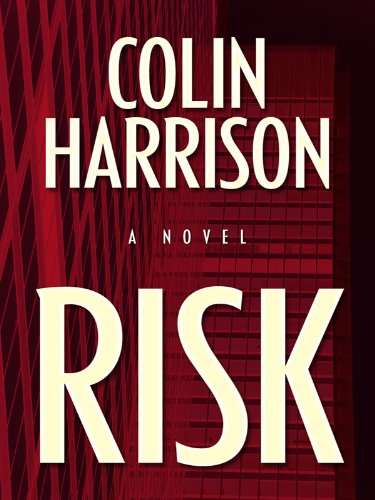 George Young never thought of himself as a detective, but that's pretty much his vocation -- an attorney at a top insurance firm, he pins down suspicious claims. But Mrs. Corbett, the rich, eccentric wife of the firm's founder, has it in mind to put George's skills to a peculiar assignment. With only a few months to live, her one desire is to know the true circumstance of her son Roger's violent death. George will have to take a few chances to get to the bottom of it.

COLIN HARRISON is the author of six novels. He lives in Brooklyn, New York.

From The Washington Post's Book World/washingtonpost.com Reviewed by by Patrick Anderson Colin Harrison writes sophisticated novels set in New York. They earn excellent reviews but aren't as well known as they should be. Typically in Harrison's novels, a man who operates at the city's more rarefied levels makes a mistake that puts him at the mercy of denizens of its lower depths. In "Risk," his seventh novel, his imperiled Everyman is lawyer George Young. He has a nice wife who works for a bank, a daughter in college and an apartment on the Upper West Side. He likes to come home at night, watch a Yankees game on TV and drink $14 red wine, which he calls cheap wine, proving once again that all things are relative. As the story begins, the widow of the founding partner of Young's law firm asks a favor. Her middle-aged son Roger died recently. He was hit by a truck as he left a downtown bar where he had been drinking alone for several hours. The woman is herself dying, and she wants Young to find out what her son was doing and thinking in the hours before his death. It's an impossible assignment, but she insists, and Young, who was both fond of and indebted to her late husband, accepts. The first thing he learns is that Roger, who'd once made a fortune on Wall Street, had lost his money, been divorced by his wife and was living in a cheap apartment downtown. Roger was a loser, Young decides, "but on Wall Street you can be an inflatable clown and make a lot of money if you are in the right place at the right time, like America in the eighties and nineties." Young starts digging. He talks to a private investigator who'd previously looked into the case and warns him to stay away from it. Another warning comes from the bartender who served Roger on his last night and says that a mob-type character had also been around asking questions. The super in the dead man's building demands a bribe before doling out information. Eventually, Young makes his way to Roger's last girlfriend. She's young and Czech and rather ordinary except that she has beautiful hands: "I am sorry I cannot shake hands. I am hand model and must protect them." Harrison views New York with a cool but compassionate eye. What distinguishes "Risk" is not its plot -- investigation, danger, resolution -- but the people, the digressions, the details along the way. In an East Side apartment building, "the tall bellman was a piece of fossilized Irish timber, and his white hair and stiff blue uniform made him look like a retired admiral." In a Lexington Avenue antique map store, Young meets a former "dentist for movie and television stars" who has lost an arm. Asked for details, he explains, "Subway-car door. My own fault. I was saved by a Japanese tourist who used her dress belt as a tourniquet. Wonderful woman." Here's part of a remarkable description of the Czech model: "She rotated her hands in space, as if each held an invisible fruit. These were ethereal fingers that touched only luxuries: diamonds, gold, watches, the smooth skin of cars that cost more than houses." And this reflection on the city: "After you've lived in New York for a while, say twenty years, you begin to see the unending conflict between the city that was and the city that will be. . . . My mother remembered when they tore down Pennsylvania Station, where Madison Square Garden is now. She used to read about New York, study the history. Canal Street was a canal. Bryant Park was a reservoir. Battery Park is called that because there was a battery of cannons out in the water to protect the harbor. Coney Island was once a real island. The city is always changing, and I find this sad and mystifying." Note also this memory of summer vacations at Cape May: "I like the town's cheesy Middle Americanness. The kids in flip-flops dragging sandy towels, the saltwater taffy, the miniature golf, the landscape of obesity roasting contentedly on the beach. I fit in just fine." Amid these elegant digressions -- I will not soon forget that "landscape of obesity" or the humanizing "I fit in just fine" that follows -- Young learns that Roger had been involved with some very hard characters, and inevitably the well-meaning lawyer falls into their clutches. Predictably, he triumphs over them; then, unpredictably, he discovers secrets that end the story on a touching note. "Risk" was originally published as a 15-part serial in the New York Times magazine. I didn't read it there because if I'm enjoying a novel I don't want to wait a week for the next installment. It's good that it's out in book form now, somewhat edited and expanded. As crime fiction goes, it's a small gem. bookworld@washpost.com
Copyright 2009, The Washington Post. All Rights Reserved.