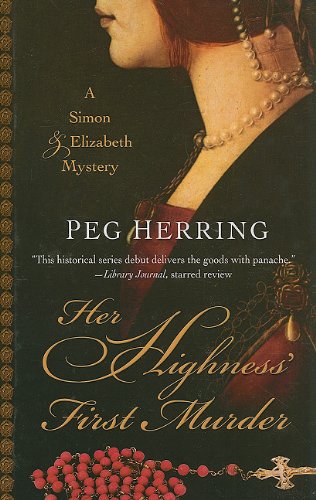 Dear Reader,
I don't know how the idea of Elizabeth Tudor in a mystery came to me (I actually did not know it had been done before!), but I know when. I was driving to see my sister in Wisconsin. The story started forming as I drove for seven hours. Driving is the perfect creative zone for me, alert but not totally focused, and the Upper Peninsula of Michigan is great for inspiration.
Readers have been kind, which is a relief. The only thing two readers mentioned that I'd like to speak to is the idea that Elizabeth at thirteen might be too young to delve into a murder investigation. Here's my argument.
First, thirteen was a goodly age in Tudor times. Juliet's mother comments to her twelve-year-old daughter that she was a mother at the same age Juliet is first considering marriage.
Second, Elizabeth Tudor is no ordinary girl. Records report that she was called to recite for her mother and father to demonstrate her learning, including grasp of foreign languages. Now, her mother was executed when Elizabeth was three, so she must have been quite the little scholar.
Finally, there's the fact that Elizabeth was a princess in limbo. She reminded her father of the wife he'd loved and beheaded, so she was kept from Henry's presence for long periods. She was intelligent and a little--well, maybe a lot--nosy. Bored and rejected, why wouldn't she have seized on something that was intriguing, exciting, and demanded a quick mind, especially with the help of Simon, a willing and equally curious friend?
This series will follow Elizabeth through the stages of her life, but I had to begin with her youth to show her relationship with her father, which influenced everything else in this wonderful, fascinating woman's life.
Peg