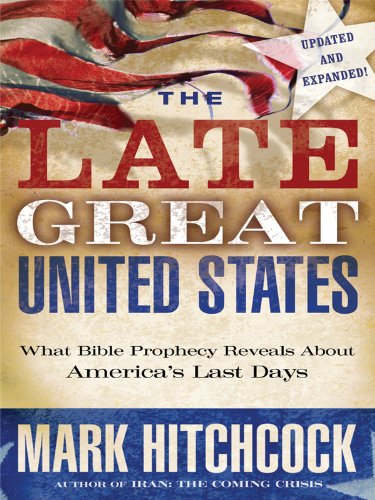 Is it possible the United States, a superpower without peer in history, might not be a key player as the world makes its way down the road to the Battle of Armageddon?

This is the central question explored by prophecy expert Mark Hitchcock in The Late Great United States, a fascinating behind-the-headlines look at numerous current events and how they relate to what the Bible says about the last days.

Americans are accustomed to seeing their country center stage as a world power, but as Hitchcock carefully details, this may not be the case in the final scene. Based on extensive research of the Bible and other sources, The Late Great United States provides compelling and often surprising answers to questions like these:
·Does the Bible say anything about America in the last days?
·How could the U.S. fit into God’s prophetic plan?
·Will America survive?
·Might the anti-Christ come from America?
·Could America’s addiction to oil be her undoing?
·Will America be destroyed by a nuclear attack?
·Could America fall from within as a result of moral corruption?
·Is America still a “blessed” nation?
·How should individual Christians respond to a world in chaos?

Regardless of America's final fate and the outcome of dire events at the end of the age, Hitchcock urges us to find our hope in a God who will not forsake us–no matter what cataclysms we experience on earth.

Mark Hitchcock, Ph.D., an authority on Bible prophecy, has written fifteen books on the topic, including Iran: The Coming Crisis. A law school graduate, Mark was called to the ministry in the 1980s. After graduation from seminary, he became pastor of Faith Bible church in Edmond, Oklahoma, where he still serves. Mark lectures frequently on prophecy themes and has appeared on MSNBC, Fox News, and CNN. Mark and his wife, Cheryl, have two sons, Justin and Samuel.

I turn back to your prophets in the Old Testament and the signs foretelling Armageddon, and I find myself wondering if we are the generation that is going to see that come about. I don’t know if you have noted any of those prophecies lately, but, believe me, they describe the times we are going through.
—President Ronald Reagan, 1983

Suppose someone wrote and published the ultimate compendium of music history...but left out any mention of Beethoven, the Beatles, or Garth Brooks.

Or the French produced a video tour of Paris...with nary a glimpse of Notre Dame, the Louvre, or the Eiffel Tower.

Imagine a math textbook containing an entire year’s curriculum...never once using or discussing the number one.

When an authoritative resource claims expertise in a particular field of knowledge, we usually expect it to touch on the most prominent subjects within its purview.That’s why somany Christians read their Bibles—and biblical prophetic passages in particular—fully confident that it must somehow reveal something about the role of America in the end times. After all, God, who exists in all times, who sees the end of history from the beginning, who indeed sovereignly governs every moment of history—God, who reveals key end-time events in the prophecies of Scripture, can’t possibly have omitted from His opus the most powerful, most influential, and by many counts most God-blessed of all nations that have ever risen.

By any standard of measurement, America occupies center stage in the world arena. No one disputes the fact that America has a distinctive history, during which it has risen to dominate global affairs. In a quarter of a millennium it has become a nation unlike any other in the history of the world. It has superseded nations with much longer histories. No nation in the history of civilization has exercised greater influence than the United States of America— politically, militarily, economically, culturally, linguistically, and possibly even religiously. As the old saying goes, “When America sneezes, the world catches a cold.”

Most of America’s ascent has happened in less than one hundred years. America’s awe-inspiring rise to superpower status in the twentieth century accelerated to maximum upward velocity in the aftermath of WWII. In an ironic twist, the war’s tragic losses delivered America from the poverty of the Great Depression. The United States emerged fromWWII better off militarily, politically, and economically than any other nation. Even during the dark days of the cold war, America had the upper hand on the Soviet Union, as was finally proven in the early 1990s when the Soviet Empire unraveled at the seams and America found herself alone at the top.

Today, America prevails as the world’s lone superpower. The last contender standing. But the “champ’s” reign hasn’t been the smooth ride that many optimistically envisioned. From the 1950s through the 1980s, many believed that the demise of the Soviet Union would ensure greater global security.
Americans envisioned a brave new world free from the tyranny of Soviet communism. Like many dreams, top-dog status hasn’t been what most people expected.

We inaugurated the single-superpower era with the first Gulf War in theearly 1990s. Operation Desert Storm was a glowing success. The future looked bright. But then the real trouble started. The under- ground garage bombing of the World Trade Center on February 26, 1993, was the first assault of Islamic terror on American soil—a dark omen of things to come. Gathering stormclouds loomed closer with the suicide bombing attack on the USS Cole in 2000.

Then dawned the darkest day in American history—the devastating attack of 9/11—plunging America headlong into the age of radical Islamic jihad. Radical Islam declared open war on the United States. The stunning attack gripped the nation, a portent of many more to come. America and its allies invaded Afghanistan in 2001 and launched the Iraq War in 2003—a war that has cost trillions of dollars and thousands of lives. And most recently? Economic meltdown. Skyrocketing oil prices. The subprime mortgage crisis. The dollar’s devaluation to all-time lows. Foreign nations, awash in oil money, buying major U.S. financial institutions. Runaway deficits and an out-of-control federal budget. Smothering debt.The looming threat of radical Islam.

And the worst fear of all—weapons of mass destruction on American soil.

Many are openly saying that anything less than victory in the currently festering conflicts in Iraq and Afghanistan will weaken America’s resolve, embolden the jihadists, and force the United States to abdicate its role as world leader and to retreat into isolation.

America’s past is glorious and inspiring. Its present is unstable, yet studded with glimmers of cautious optimism.

But what of the future? Is there any sure word?

Americans, the Future, and the Bible

The increasingly frantic tempo of change in modern life fosters a global sense of impending crisis. People everywhere fear that the world is moving rapidly toward some calamity—possibly even a finale. I’m sure you’ve sometimes wondered what’s going to come of all the danger, uncertainty, and instability.
How long can the tensions be held in check? How long until the lid blows off? Terrorism—that Bad Thing that used to happen in other places—has rudely intruded into the life of every American. U.S. troops are still in Iraq, still in Afghanistan. Some predict that we might realistically be there for ten years, or longer. The epochal conflict with jihadist terror is still in its infancy. What happens when it grows up?

But the real issue that seems to lurk, thinly veiled, behind all these questions is: Could we be nearing closing time? The Bible is the only authority for addressing this question, and Americans seem to be discussing biblical prophecy more than ever before. Many believe that the Bible contains the answers about earth’s final days.

Here’s a brief sample of what Americans believe about the book of Revelation and the end times:

· 59 percent believe that the prophecies in Revelation are going to
come true.

· Nearly 25 percent believe that the Bible predicted the September 11
attack.

· 35 percent are paying more attention to how news events might
relate to the end of the world.

· 17 percent believe the end of the world will happen in their lifetime.

It’s clear that most Americans look to the Bible as an accurate guide for the future. It’s also evident that the collective American angst about our world’s destiny is building. The fuse is lit. There’s fire in the hole. Now we’re just wondering how long till it’s all gonna blow.

As we look into the pages of the Bible, we quickly discover that, as alarming as current events might be, they don’t surprise God. The geopolitical situation we see today in the headlines bears a remarkable correspondence to the trend of world events that Bible prophecies foretold millennia ago. As we probe God’s Word for clues, we discover the You Are Here arrow marking our current position in God’s unfolding program, and we notice that some predicted events may occur in our lifetime. Prophecies, which in the past were sometimes carelessly brushed aside as unbelievable, are sparking renewed
interest. But perhaps no issue has created more interest than the possible role of America in the end times. This is the question that people everywhere are asking. It’s the question that this book will seek to answer.

On January 29, 2008, I had the privilege of appearing on a national television program in Texas. After the program, one of the station employees gave me a ride tomy next appointment.We talked as we drove, and I learned that he pastors a new church in the area.We discussed various aspects of pastoral ministry and church life, and before long the topic turned to Bible prophecy. As we neared our destination, he said, “There’s one question that I have wondered about more than any other issue related to Bible prophecy.”

I knew what he was going to ask. “Where do you think America fits into biblical prophecy?”

I’m asked this question more—much more—than any other. People ask me this question at churches, at conferences, on radio and television programs. And as I have talked with my friends and colleagues who teach around the United States and around the world, they confirm that the most-asked question in all of Bible prophecy is: What is America’s role in the end times? Something inside us wants to know what will ultimately happen to this great land we call the United States of America.

“God bless America!” Is it a prayer, a promise, or a prophecy? We can see and hear the slogan in music, on bumper stickers, in casual conversations, in campaign rhetoric, at historic moments in our nation’s life (both joyful and sorrowful), from podiums, in parades, and in a host of other public and religious forums.Will God bless the United States in the future? Is there any sure word of our nation’s future in the Bible generally, and the prophetic passages specifically? It’s amazing! One of the most frequently asked q...