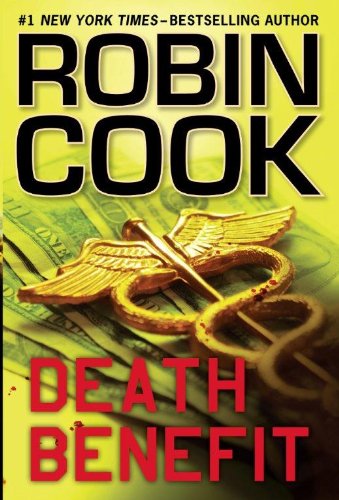 "Columbia medical student Pia Grazdani is working closely with molecular geneticist Dr. Tobias Rothman on cutting-edge research that could create replacement organs for the critically ill. When tragedy strikes in the supposedly secure lab, Pia and classmate George Wilson investigate. Meanwhile, two ex-Wall Street whiz kids race to find ways to control actuarial data and securitize the policies of the aged and infirm for profit. As Pia and George dig deeper, one question remains unanswered: Is someone attempting to manipulate private insurance information to allow investors to benefit from the deaths of others?"--P. [2] of cover.

Doctor and author Robin Cook is widely credited with introducing the word 'medical' to the thriller genre, and over twenty years after the publication of his breakthrough novel, Coma, he continues to dominate the category he created. Cook has successfully combined medical fact with fiction to produce over twenty-seven international bestsellers, including Outbreak (1987), Terminal (1993), Contagion (1996), Chromosome 6 (1997), Foreign Body (2008), Intervention (2010) and most recently Cure (2011).

."..a fascinating tale that never slows down." -"Library Journal" "Cook provides an interesting study of the strange bedfellows the biotech business and the mob might make..." -"Publishers Weekly"