Items related to The Man Who Saw a Ghost: The Life and Work of Henry...

McKinney, Devin The Man Who Saw a Ghost: The Life and Work of Henry Fonda (Thorndike Press Large Print Biography)

The Man Who Saw a Ghost: The Life and Work of Henry Fonda (Thorndike Press Large Print Biography) 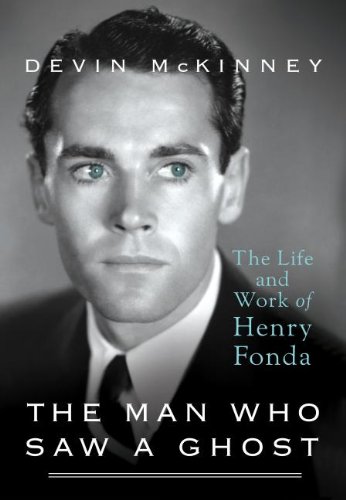 Evaluates the complex life of the stage and screen icon, providing coverage of such topics as his service during World War II, his heralded accomplishments in such productions as The Grapes of Wrath and On Golden Pond and his tragedy-marked marriages. (biography & autobiography).

"How many different ways can I mean to call this book essential? The sentences, in honor of their subject, threaten to explode with implication and insight." -- Jonathan Lethem, author of Chronic City and Motherless Brooklyn

"McKinney makes it clear that Henry Fonda didn't just see ghosts--he wanted to tackle them, both to exorcise his own demons and to possess them, while portraying characters representative of America: magnificent, but flawed. You might actually start to believe you're getting to know a man who was, even to those closest to him, unknowable." -- Robert Nott, author of He Ran All the Way: The Life of John Garfield and The Films of Randolph Scott

"The author of the best book in a generation about the Beatles, Devin McKinney here turns to one third of the cinema's trinity of American idealism (along with James Stewart and Gregory Peck), immediately grasping that like great characters in fiction from Ahab to Joe Christmas, great stars are distinguished by contradiction. No one was both as righteous and dark as Henry Fonda, and in no actor was the coexistence of the two as mysterious or did they so adamantly threaten to be the same. This book is incisive, eloquent and gorgeous, but what elevates McKinney is that the prose is matched by the thinking behind it, as singular as it is brilliant, and bracingly unimpressed by the decades of conventional wisdom that have preceded it." -- Steve Erickson, author of Zeroville and These Dreams of You

DEVIN MCKINNEY, author of Magic Circles: The Beatles in Dream and History (2003), has written for The Village Voice, The Oxford American, The Guardian, The American Prospect, Film Quarterly, and numerous other publications.  He lives in southern Pennsylvania.

1. The Man Who Saw a Ghost: The Life and Work of Henry Fonda (Thorndike Press Large Print Biography)