Items related to Fall Of Giants (The Century Trilogy)

Fall Of Giants (The Century Trilogy) 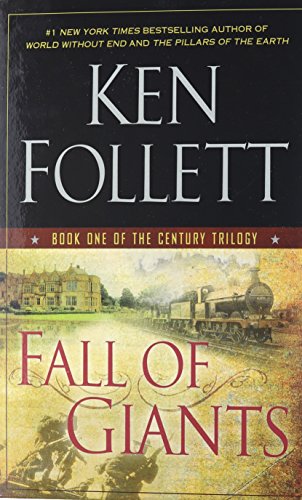 It is 1911. The Coronation Day of King George V. The Williams, a Welsh coal-mining family, is linked by romance and enmity to the Fitzherberts, aristocratic coal-mine owners. Lady Maud Fitzherbert falls in love with Walter von Ulrich, a spy at the German Embassy in London. Their destiny is entangled with that of an ambitious young aide to U.S. President Woodrow Wilson and to two orphaned Russian brothers, whose plans to emigrate to America fall foul of war, conscription and revolution.

Amazon Best of the Month, September 2010: Welcome to the 20th century as you've never seen it. At over 1,000 pages, Fall of Giants delivers all the elements that fans of Ken Follett have come to treasure: historical accuracy, richly developed characters, and a sweeping yet intimate portrait of a past world that you'll fully inhabit before the first chapter is through. The story follows five families across the globe as their fates intertwine with the extraordinary events of World War I, the political struggles within their own countries, and the rise of the feminist movement. Intriguing stories of love and loyalty abound, from a forbidden romance between a German spy and a British aristocrat to a Russian soldier and his scandal-ridden brother in love with the same woman. Action-packed with blood on the battlefield and conspiracies behind closed doors, Fall of Giants brings the nuances of each character to life and shifts easily from dirty coal mines to sparkling palaces. There is so much to love here, and the good news is the end is just the beginning: Fall of Giants is the first in a planned trilogy. --Miriam Landis

1. Fall Of Giants (The Century Trilogy)

2. Fall Of Giants (The Century Trilogy)