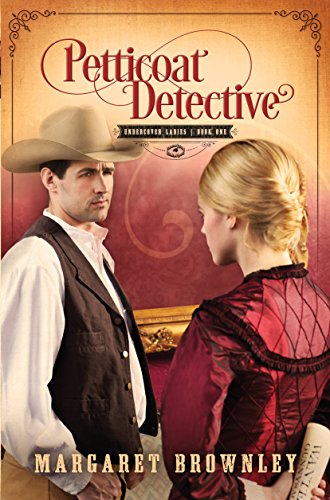 Pinkerton detective Jennifer Layne is working undercover as a parlor girl named Amy on a high profile case when a girl who is central to her investigation turns up dead, and handsome Tom Colton is a prime suspect.

Posing as a lady companion named Amy is a first for Pinkerton detective Jennifer Layne. She’s on the trail of the notorious Gunnysack Bandit, when one of her fellow parlor girls meets an untimely demise. Her investigation intersects with Tom Colton, a former Texas Ranger determined to clear his brother’s name. Will the two help each other or just get in the way?

Pinkerton detective Jennifer Layne has a past full of identities. . . .

But posing as a lady companion named Amy at Miss Lillian's Parlor House and Boots in Goodman, Kansas, is a first for her. Amy's current assignment has her on the trail of the notorious Gunnysack Bandit, when one of Miss Lillian's girls--Amy's best hope for a lead--meets an untimely demise.

Former Texas Ranger Tom Colton has every reason to distrust the green-eyed beauty at Miss Lillian's who calls herself Amy. Determined to clear his brother's name, he's convinced she knows more than she lets on, and he means to find out what it is.
As Amy's investigation continues, her biggest problem is Tom and his stolen kiss. The closer she gets to tracking down the outlaw, the harder it is to keep Tom from finding out the awful truth about his brother. The Gunnysack Bandit she can handle, but it'll take a whole lot of faith and a little help from Miss Lillian and her girls to snag the man who stole her heart.

Book Description Thorndike Press Large Print, 2015. Condition: Good. Large Print. Shows some signs of wear, and may have some markings on the inside. Seller Inventory # GRP106147606

Book Description Thorndike Press Large Print, 2015. Condition: Good. Large Print. Former Library book. Shows some signs of wear, and may have some markings on the inside. Seller Inventory # GRP106421169

Book Description Thorndike Press Large Print, 2015. Condition: Good. A+ Customer service! Satisfaction Guaranteed! Book is in Used-Good condition. Pages and cover are clean and intact. Used items may not include supplementary materials such as CDs or access codes. May show signs of minor shelf wear and contain limited notes and highlighting. Seller Inventory # 1410476480-2-4