Items related to Catwalk (An Animals in Focus Mystery)

Catwalk (An Animals in Focus Mystery) 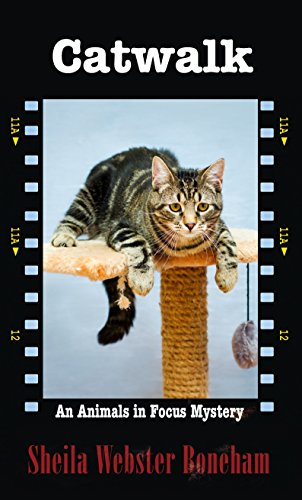 Agility can be murder for cats, dogs, and people!

Animal photographer Janet MacPhail is training for her cat Leo's first feline agility trial when she gets a frantic call about a "kidnapping." When Janet and her Australian Shepherd Jay set out to track down the missing party, they quickly find themselves drawn into the volatile politics of feral cat colonies and endangered wetlands.

Janet is crazy busy trying to keep up with her mom's nursing-home romance, her own relationship with Tom, and upcoming agility trials with Jay and Leo. But the discovery of a body on the canine competition course stops the participants dead in their tracks--and sets Janet on the trail of a killer.

Sheila Webster Boneham is the author of the Animals in Focus Mystery series. Drop Dead on Recall, the first in the series, won the Dog Writers Association of America Award in Fiction, Mystery, or Humor. She is also the author of 17 nonfiction books, six of which have won major awards from the Dog Writers Association of America and the Cat Writers Association. For the past two decades Boneham has been showing her Australian Shepherds and Labrador Retrievers in various canine sports. She has also bred top-winning Aussies, and founded rescue groups for Aussies and Labs. Boneham holds a doctorate in folklore from Indiana University and resides in Wilmington, N.C. For more information, go to SheilaBoneham.com.

Please browse inside this title with the preview below.

Catwalk (An Animals in Focus Mystery)

Book Description Hardcover. Condition: Good. Connecting readers with great books since 1972. Used books may not include companion materials, some shelf wear, may contain highlighting/notes, may not include cdrom or access codes. Customer service is our top priority!. Seller Inventory # S_328938870