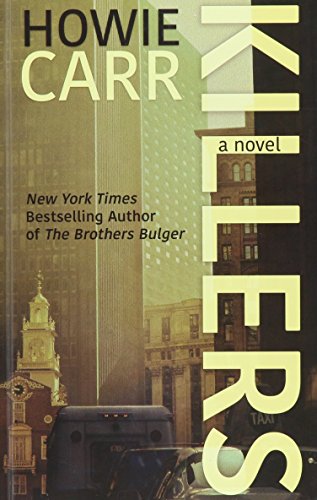 Whitey Bulger is gone from Boston, but Bench McCarthy is here to take his place.

Bench McCarthy is a thug's thug, a hitman, an underworld jack-of-all-trades running his own mob out of Winter Hill in Somerville while simultaneously handling "wet work" for Sally Curto, a half-demented, totally obscene mob boss.

After years of gangland peace, Bench and Sally suddenly find themselves clay pigeons for unknown hit crews coming at them from every direction. The motives are as murky as the hitmen themselves, but all roads seem to lead back to the State House, where corrupt pols are battling over a bill to legalize billions of dollars' worth of new casinos.

In order to stay alive as he puts an end to the uprising, the wisecracking Bench must set aside his objections and enlist the help of Jack Reilly, a dodgy ex-cop turned private investigator. The hunter has become the hunted.

"Killers" is a thrilling ride through the dark underbelly of Boston crime and politics that could only have been written by the man novelist James Ellroy calls "the Bacon-Banging Boston Bossman"-Howie Carr, the newspaper columnist on whom Whitey Bulger first put out a contract and then called as a defense witness during his 2013 murder trial in Boston.

HOWIE CARR is the author of "Hard Knocks," as well as the "New York Times" nonfiction bestsellers "The Brothers Bulger" and "Hitman." A native New Englander, he is a columnist for the "Boston Herald," the host of a regionally syndicated radio talk show, and a member of the National Radio Hall of Fame. From his prison cell in Florida, Whitey Bulger tells visitors that he still regrets not murdering Carr when he had the chance back in South Boston.

Praise for the Novels of Howie Carr:

“A must read from start to finish!” ―Col. David Hunt, New York Times bestselling co-author of Terror Red, on Killers

“A knock-’em-down, drag-’em-out, put-two-in-the-head page-turner by a man who knows the power-that-be on the hill and the killers-that-are on the streets. Killers is a killer! Don’t miss it!”―William Martin, New York Times bestselling author of The Lincoln Letter