Mushaba, Grandmaster Anakhanda Ascended Masters of Color - Ascended Beings of Light: The Origin and Mission of People of Color

Ascended Masters of Color - Ascended Beings of Light: The Origin and Mission of People of Color 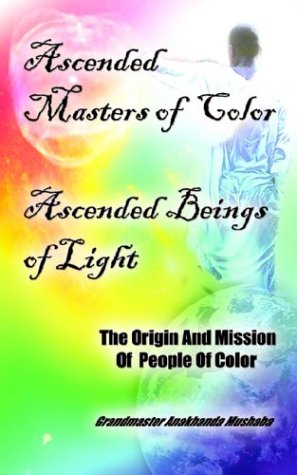 This is an excellent book about Ascended Beings of Color. It goes into the fact that Ascneded Beings of the African/Black Race actually do exist. It talks about some of the Ascended Masters that mnay people thought were of a different race like Jesus for instance who speaks about his true race origin when he walked the eath as Jesus! It goes into the origin and the mission of the African/Black race beings one earth. It gives a great deal of information and enlightenment on a wonderful blessed people who have a mission and have given amazing contributions to humanity. You will find powerful provacative information in this book that is sure to raise eyebrows and get everyones attention on a subject of great importance. It is a book written in love and states the fact as they have been presented by the Masters, angels and extra-terrestrials themselves. The book is a love gift to all of humanity and is a book for all races of humanity. It is a history of a down trodden people that have been revealed that is little known if at all on earth. This book os about teaching brotherhood and siisterhood and brings forward the message of the first african ascended masters by the name of Afra! This book truly clears up so much confudion based around this subject. You can read some of the readers coments on amazon .com under the book title and or visit our website at mushabaforce.com Some of the various entitites who contributed to this work of great divine love for humanity is: Ascended Masters Afra, Archangel Michael, Sananda(Jesus, The Council of Light, Djwhal Khul, Adama high priest of Telos, a group of beings called The Reconnections, Ascended Master Kuthumi, Ascended Master Sophia. It answers some very tough questions and speaks about a race of extra-terrestrials that are all black skinned beings who are of divine love and oneness. It speaks about the experiments and their involvement in the evolution of humanity and the importance of what they done. This book adresses information about Isis, the great sphinx, the Lion Head, Ascended being El Moriya, Archangel Gabriel, and a chapter contributed by an author by the name of Mark Charlton Davis who is a very inspiring author who has several books published. It address the affect that this black white syndrome has had on both races of people and how to change that which basicaly will be done through the youth of the world who is born very different from most of us. They certainly have their own agenda. It goes into a very wonderful detail about many subjects that is truly needed by all of humanity to bring understanding and awareness to all people and to stop this racist nonesense. It also talks about how Aids in Africa can be cured. This is a book of myriad information that is vital to the evolution and understanding of humanity. It is raw and t is truth and it speaks directly to what need to be addressed in a clear, historical way that is not known on earth.

I have taken a great deal of time to bring this book forward. It was many years of researching this topic because it was unknown and never spoken about particularly within the spiritual, metaphysical, esoteric circles of learning. I felt the call and the importance of a book of information of this type needing to come forth. It has been a wonderful journey that has just begun. This book and all contained within it is brought forward and presented with total divine love and oneness. This is an education that is a must for all human beings on earth regardless of race or belief system.

Anakhanda Shaka Mushaba has been involved in communicating with higher intelligence since the early age of 5. He use to lay in his bed and look up at the ceiling and watch what appeared to be a moving picture like a movie that would open up with the ceiling as the sreen and begin to show pictures, writing in a different language along with interpetating the words being written. It was the language of his planet of origin called planet Mushaba originally from the Andromeda Galaxy but now located in the Pleiadies star system called Alcyone. These words that were being written and the scences being shown was the script of his life being written by him and the scenecs from the life to be. This begin his journey and mission on earth. He is an excellent speaker, and conducts workshops on the Mushaba Force which is the energy of divine love and oneness, reedom and empowerment. This force was personally named by God and Goddess and created for a specific purpose. He has other books authored and ready for pront. HIs insight and approch is uniquely refreshing and he speaks to the people in a clear simple language.

2. Ascended Masters of Color - Ascended Beings of Light: The Origin and Mission of People of Color