Items related to Walking the Earth: Life's Perspective in Poetry 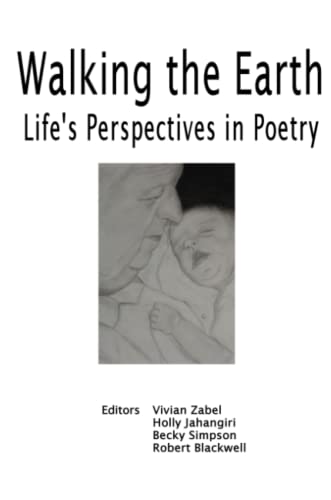 Eight poets include their work in a 178 page collection that shows life's perspective as they walk the earth. Divided into eight sections that summarize the path of life, the book contains 137 poems that cover subjects from childhood to growing older, faith to nature, enjoying life to sorrow, love to everyday life. Editors are Vivian Gilbert Zabel, Holly Jahangiri, Becky L. Simpson, and Robert E. Blackwell.

Wondering what his life may have been under other circumstances, Robert E. Blackwell wrote "Memories That Never Were": The chances gone beneath the swirling sands, The bonds not made at a saddening cost.

Facing growing older, Vivian Gilbert Zabel acknowledged memory’s fickleness in "Lost Memory": Memories tease with a tempting taste of yesterday Then flicker away before I can fully favor the flavor.

T. Larkin addressed the short-comings of life in "Dry Season," leaving a touch of hope: Even a broken pencil can render an incomplete drawing, and I – a broken-pencil poet – can strive to describe another fractured moment in a splinter of a life.

Understanding of the power and existence of loneliness can be found in Becky L. Simpson’s "Everybody Everywhere": Everybody everywhere, No matter what one’s station, Has moments of deep loneliness And quiet desperation.

Diane Steele recreated her favorite locale in "My Place": The frogs croaked out a serenade, as crickets chirped replies. The lighting for this sweet refrain was the darting of fireflies.

As her aunt suffered the results of smoking for years, Jacque Graham poured her pain into "Cancer": Bald does not seem attractive now . . . Too high a price for Being "branded" by the promise of popularity.

Early reviews have been favorable.

The eight poets had various comments. Vivian Zabel said, "The whole project excited me because I was able to work with talented poets." Holly Jahangiri says, "The variety of personal perspectives and writing styles we all brought to the work is what gives it such a broad appeal."

Becky Simpson, who has recently begun writing, summarizes Walking the Earth as a study in eight different poets’ perspectives of life. According to Robert E. Blackwell, Walking the Earth provided him with the opportunity to work with his mentor, Vivian Zabel, and a group of writers of tremendous credentials and talent.

Diane Steele expressed her opinion of the book and her co-authors by first saying that Walking The Earth is a collection of poetry that touches many aspects of life. "The book offers a diversity that makes it unique."

T. Larkin commented in his poetic manner: Robert’s writing: This is free-fall. Holly: Midnight blossom ripens beneath the full moon, opening for the stars delight. Diane: A cherished teacup sits on a windowsill, now the home of a springtime budding. Vivian: Knowing that the stars shed their tears only for those who care enough to see. Becky: A dancer eases across the floor, moving smoothly to the music of her own shoes. Jacque: A warm blanket, slippers, a cup of hot chocolate. Kimberly: When the butterfly emerges and dries its wings, and is now prepared for flight.

"The authors in the book have created pieces from their hearts. A gem for everyone exists within this versatile treasure," Kimberly Ligameri commented.

When a writer of poetry looks at life's circumstances he/she often finds the beginning for a new poem according to Jacque Graham.

Book Description Lulu.com 2005-10, 2005. Condition: New. This item is printed on demand. Brand new book, sourced directly from publisher. Dispatch time is 4-5 working days from our warehouse. Book will be sent in robust, secure packaging to ensure it reaches you securely. Seller Inventory # NU-LSI-06935491