Items related to Mozart: the Man and the Artist, as Revealed in His...

Kerst, Friedrich Mozart: the Man and the Artist, as Revealed in His Own Words

Mozart: the Man and the Artist, as Revealed in His Own Words 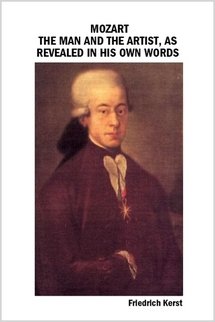 The German composer Wolfgang Amadeus Mozart (1756-1791) was not only a musical genius, but was also one of the pre-eminent geniuses of the Western world. He defined in his music a system of musical thought and an entire state of mind that were unlike any previously experienced. He was an extremely sophisticated and complex man. His letters reveal him as remarkably creative, fascinated by the arts, principled, religious and devoted to his father. He had an energetic personality that was almost completely devoid of any cynicism, pessimism or discouragement from creating music. This book is, in a way, an autobiography of Mozart written without conscious purpose, and for that reason peculiarly winning, illuminating and convincing. The outward things in Mozart's life are all but ignored in it, but there is a frank and full disclosure of the great musician's artistic, intellectual and moral character, made in his own words.

A child prodigy who blossomed into the Classical era's most influential composer, Wolfgang Amadeus Mozart (1756–91) wrote more than 600 works in his brief life. His oeuvre encompasses a wide variety of genres, including symphonic, chamber, operatic, and choral music.