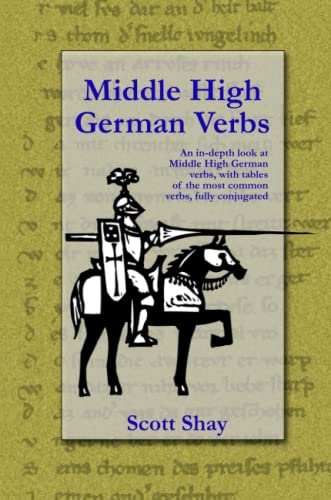 Middle High German Verbs presents an in-depth look at Middle High German (MHG) verbs, with tables of the most common verbs, fully conjugated. MHG was the language of the great literary works of the Middle Ages in the German speaking world, including Iwein, Parzival, Tristan, Minnelieder, Nibelungenlied, and Gudrun. The reader using only a dictionary will have a difficult task figuring out what the proper infinitive form of a given verb instance might be. This book provides a comprehensive reference for MHG verbs to help you read and translate the great works of the period. The book presents an in-depth look at the makeup of MHG verbs, including grammatical concepts, in easy to understand language. It presents 340 of the most common verbs that exhibit some type of irregularity; each verb has its own page with translations, principle parts, and full conjugation for all appropriate numbers, persons, tenses, and moods. This book will be an important addition to your German linguistic and literature references.

As a student of Middle High German in graduate school, struggling through such classic works as Hartmann von Aue's Iwein, and the Nibelungenlied, I realized that a book showing the various conjugations for a verb in all its detail would be quite helpful. I searched through bibliographies and scoured the Internet, and could find no such reference. Thus began this project. I believe that this book, along with a good dictionary, will be an invaluable aid and reference to all students of Middle High German language and literature.

Middle High German verbs are quite different from their modern-day counterparts, and it can be quite difficult to determine the proper meaning of a given verb form found in a text from the period. It is not always a simple matter of looking up a given form in a dictionary to find its meaning, as is often the case with other parts of speech.

This book presents an in-depth look at the makeup of Middle High German verbs, including grammatical concepts, in easy to understand language. It presents in detail 340 of the most commonly encountered verbs that exhibit some type of irregularity in Middle High German: each verb has its own page with New High German and English translations, principle parts, and a full conjugation for all appropriate numbers, persons, tenses, and moods. The book also includes an index that lists every verb form that exists in the included tables. This will allow you to look up a form found in a text, and find the entire conjugation for the verb to which it belongs. In addition, there is a comprehensive listing of over 2100 Middle High German weak verbs. Middle High German Verbs will be an important addition to your linguistic and literature references.