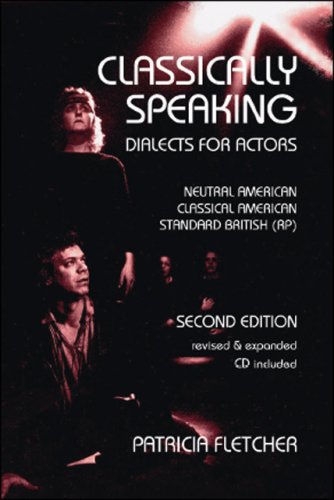 Classically Speaking offers an approach for American actors who wish to explore sound beyond their habitual speech, fine-tune their ability to hear and identify subtle variations in sounds and dialects, and to develop the flexibility and skills necessary to adjust their speech to the particular demands of a wider range of characters and material.

Neutral American Speech (NAS) is the most practical dialect an actor can study. Sometimes referred to as General American, it is spoken without regionalisms that identify an actor's specific point of origin or 'home' sounds. When effectively incorporated, the actor - and therefore the character - is not revealed as explicitly Southern, Mid-Western, or from Boston, New York, Chicago, Tennessee, New Hampshire, Texas, etc. He/she is therefore 'neutral'.

The Neutral American section gives special focus to the Rhythm Highlighters, which address general rhythmic issues for well-spoken American English, before delving into the specific spoken sounds of English in detail.

Classical American dialect offers an intermediate option between well-pronounced Neutral American and Standard British. It builds upon Neutral American, blending additional rhythmic and sound elements, which result in more formal or heightened speech without sounding British to an American ear.

Standard British (RP), the dialect traditionally spoken by the English upper and upper-middle classes, is appropriate for characters in period plays, those of the 19th century authored by Shaw and Wilde, or Restoration playwrights Congreve and Farquhar, among others.

It is also beneficial for American actors to know Standard British as a foundation on which to build their study of foreign accents. Many people worldwide who have learned English as a second language have been taught by speakers of Standard British, and this is reflected in their spoken English sounds.

Patricia Fletcher has taught Dialects, Voice, and Speech in numerous professional acting programs including: New School for Drama MFA Acting Program/New School University, Actor's Studio Drama School, Mason Gross School of the Arts MFA Acting Program/Rutgers University, Brooklyn College Graduate Acting Program, William Esper Acting Studio, and New Actors Workshop. She is a Designated Linklater Voice Instructor, and holds an MA in Voice and Speech from Antioch University. Patricia has worked as an actor on and off Broadway, and has served as a Voice, Speech, Dialogue, and Dialect Coach for Broadway, Television, and Feature Films. She does extensive private coaching.

Whether you are an actor, voice teacher, or director, Classically Speaking by Patricia Fletcher is A TERRIFIC AND COMPREHENSIVE WORKBOOK for language and articulation. This book is an invaluable and well-organized guide in deciding which choices to make to enhance and serve the playing of any text, from the classic to modern repertoire. --Andrea Haring Associate Director, The Linklater Center for Voice and Language