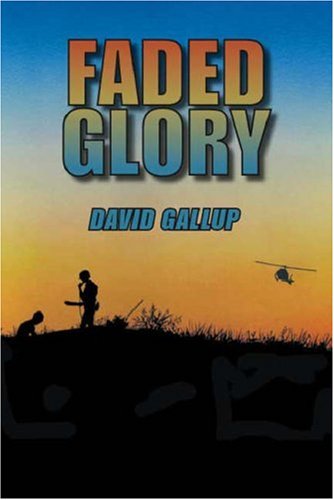 Faded Glory is an accurate and factual account of the experiences seen through the eyes of a young and impressionable Marine Corps "grunt." However, what separates this book from other stories about the United States' involvement with an unpopular war in Vietnam, Faded Glory goes on to share the story of one veteran who goes back to the country he fought in years before to do humanitarian aid projects for the disenfranchised peoples of Vietnam, many of whom were relegated to second class citizenship after the takeover of The Republic of South Vietnam in April 1975 by the army of the North.

The first part of the book deals with the growing disillusionment experienced by the author who left college and enlisted in the United States Marine Corps in 1968 thinking it was the patriotic thing to do. He was committed to assisting the people of South Vietnam whom he saw as threatened by Ho Chi Minh's invasion and intentions to subjugate the country to the will of the Communist party. While serving in the infantry in Vietnam from the spring of 1969 through the spring of 1970, the author suffered a continuing emotional loss of innocence as a result of witnessing the horrors of war and the mistreatment of the civilian population of the country by the troops who were, by definition, there to "save" them from Communism. His inability to stop the persecution manifested itself as nothing more than a very real sense of "faded glory."

The chapters about the author's tour of duty in Vietnam during the war are very basic words committed to the journal of a very young man in a very difficult place with no exaggerations, fabrications or explanations.

The text is not politically correct.

The experiences, observations and insights were set down in a time when it was acceptable to express honest feelings as opposed to pre-editing to write only what others wish to hear. The growing anger, disillusionment, and finally, despair, committed over the course of the author's tour of duty is not pretty, and often, somewhat reprehensible.

However, the author's many returns to Vietnam in the 1990s working on several humanitarian aid projects, some of which involved working for an American NGO and many more done on his own at his own expense, provided a desperately need catharsis. The book shares stories of the process of exorcizing old ghosts that haunted days and nights for over twenty years while experiencing the joys and satisfaction of truly "making a difference" in the lives of people whom he found himself unable to help in the years of his military service.