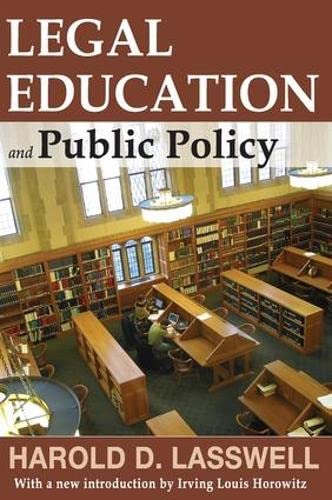 In spite of a cascade of criticism launched against the social sciences, they have brought a qualitative improvement in method and theory to the study of human beings and human relations. In the process of developing now commonplace foundations of social research few individuals have exercised a greater role in justifying and enriching social scientific thought and practice than Harold D. Lasswell.

Originally published in 1945 as The Analysis of Political Behaviour, this extraordinary volume has been re-titled Legal Education and Public Policy. The selections acknowledge Lasswell’s growing anxieties about a world of revolution, violence, and terror, and the frailties of law in addressing such matters. That he did so without recourse to vague and fatuous appeals to world law and world order is an indication of how close to empirical realities he remained. Lasswell’s essays fuse the legal and moral in the conduct of public policy. This did not deter him from arguing the case for and ultimate benefits of democratic values as a ground for legal thought. Lasswell singles out the interviewing technique of the psychiatrist, what he calls “the insight interview” in many of these essays. The Freudian world opened up the possibilities of analysis to political scientists who, prior to Lasswell, viewed neuroses in the leaders they studied but without normative points to measure their own biases.

Lasswell’s essays serve as a landmark in accelerating rapid advance in social science research. It allowed for the evolution of political behavior that has catapulted the field to a major dimension of political science studies in leadership and mass persuasion.