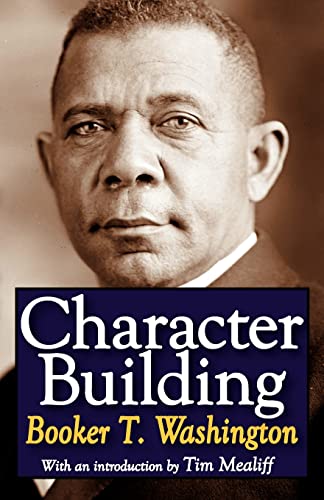 Booker T. Washington has been regarded as the leading figure in African American life, and as the man who brought his people from slavery to unfettered economic, political, and social involvement in the American mainstream. He has also been strongly criticized for advancing the cause of racial accommodation when the political agenda dictated the development of an independent black standpoint in all areas of the industrial structure. This agenda went far beyond educational reform and agrarian participation.

Character Building first appeared in 1902. While enormous changes have occurred in all phases of African American rights and responsibilities, Booker T. Washington’s broad outlines on building moral character have remained intact. Washington’s book can be viewed as a Dale Carnegie volume on How to Win Friends and Influence People—black and white—as noted by the very title of the chapters: "Helping Others," "Influencing by Example," "Education that Educates," "The Gospel of Service," etc.

For those in search of the ideological roots of black life in post-slavery times, this text will be a reminder of where the American nation has come from and, arguably, where it is going.

Booker T. Washington (1856-1915) was born a slave. He graduated from what is today Hampton University in 1875, and subsequently taught there. In 1881 he founded the forerunner of Tuskegee University. He made himself and his school two of the most well-known institutions in twentieth-century black America. He earned world-renowned recognition as an educator, social theorist, and spokesperson for African Americans.