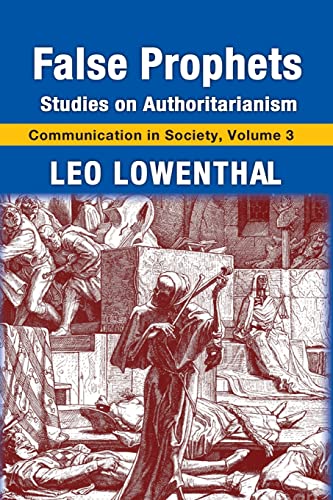 The studies in this volume deal with problems of authoritarianism and anti-Semitism. Lowenthal's book length contribution, "Prophets of Deceit," which begins this collection, is a classic of political psychology. This research study is followed by an essay, "Terror's Atomization of Man." Lowenthal uses this material for a theory of the psychological mechanisms operative under terrorist conditions and their significance for contemporary society.

Leo LOwenthal (1900-1993) was a sociologist known for his association with the Frankfurt School. He began his career by joining the then newly-formed Institute for Social Research and becoming managing editor of its journal Zeitschrift fUr Sozialforschung. Soon thereafter he migrated to the United States where he held various positions, including research director for Voice of America, the Stanford Center for the Advanced Study of the Behavior Sciences, and finally settled in the department of sociology at the University of California, Berkeley. His books (which were published in German and English) include Literature and Mass Culture, Prophets of Deceit, and Literature and the Image of Man.