Items related to Criminal Conduct and Substance Abuse Treatment - The... 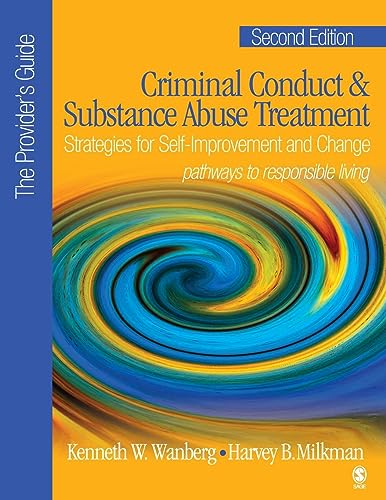 Designed for providers who work with judicial clients, the Providers Guide presents effective cognitive-behavioral treatment approaches. The Second Edition of this bestseller unveils a state-of-the-art approach for effectively preventing criminal recidivism and substance abuse relapse within community based and correctional settings.

Kenneth W. Wanberg, ThD, PhD, is a licensed psychologist in the State of Colorado and Director of the Center for Addictions Research and Evaluation, Inc.

Harvey B. Milkman, PhD received his baccalaureate degree from City College of New York and his doctorate from Michigan State University. He is currently professor of psychology at Metropolitan State College of Denver. His doctoral research was conducted with William Frosch, MD, at Bellevue Psychiatric Hospital in New York City, on the User’s Drug of Choice. From 1980–1981, he completed a sabbatical exploration of addictive behavior in Africa, India, and Southeast Asia; in 1985 he was recipient of a Fulbright-Hays Lectureship award at the National University of Malaysia. He has represented the United States Information Agency as a consultant and featured speaker in Australia, Brazil, Iceland, The Netherlands, Peru, Turkey, and Yugoslavia. He is principle author with Stanley Sunderwirth of “The Chemistry of Craving,” and author of “Better than Dope,” featured articles in Psychology Today, October, 1983 and April, 2001 respectively. From September 1992–June 2002, he was author, principal investigator, and director of Project Self-Discovery: Artistic Alternatives for High-Risk Youth, a national demonstration model funded by The Center for Substance Abuse Prevention and the Edward Byrne Foundation.

Book Description 2007. Paperback. Condition: New. 2nd. Paperback. The Provider's Guide (Criminal Conduct and Substance Abuse Treatment for Adolescents) identifies psychological, biological, and social factors that contribute to the onset of adolescent de.Shipping may be from multiple locations in the US or from the UK, depending on stock availability. 371 pages. 0.960. Seller Inventory # 9781412905923