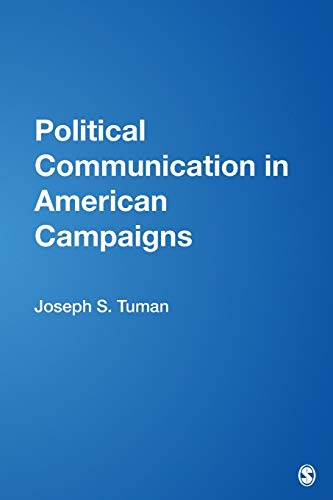 In Political Communication in American Campaigns, Joseph S. Tuman provides a comprehensive, clear, and accessible treatment of American campaign rhetoric and argues that modern elections are not really about contests between candidates or political parties; rather, they are more about the competing messages each player in the political process must present to persuade and reach voters.. This book′s triangulated approach to political communication includes (1) all forms of campaign speech and oratory; (2) the rhetorical dimensions of campaign debates; and (3) candidate/campaign interaction with mass media.
Key Features

Joseph S. Tuman (J.D., University of California, Berkeley; B.A., political science, University of California, Berkeley) is Professor of Political and Legal Communications at San Francisco State University, where he regularly teaches upper-division courses in rhetoric and terrorism, political and legal communication, argumentation & advocacy, and technology and human communication. A past recipient of the Jacobus tenBroek Society Award for Teaching Excellence, Professor Tuman has also taught at the University of California, St. Mary’s College, the New School for Social esearch, and Paris II, the top law school in France. He is the author of Political Communication in American Campaigns(SAGE, ©2008) and the co-author of numerous books, including Freedom of Speech in the Marketplace of Ideas and of The Bedford/St. Martin′s Guide to Public Speaking; he has also been the journal editor of Contemporary Argumentation & Debate: The Journal of the Cross Examination Debate Association. His work has been featured in news publications such as the New York Times, Los Angeles Times and the San Francisco Chronicle, and he has served as a network analyst for news programs on ABC, NBC, CNN and CNN International, FOX and the BBC. He currently appears as a regular political commentator for CBS in the western United States.

"What makes this book unique is the basic structure: Descriptive or historical chapters, followed by discussions of strategies and tactics of political communication in numerous contexts." Author: Pete Bicak Published On: 2010-02-09