Items related to Service Leadership: The Quest for Competitive Advantage 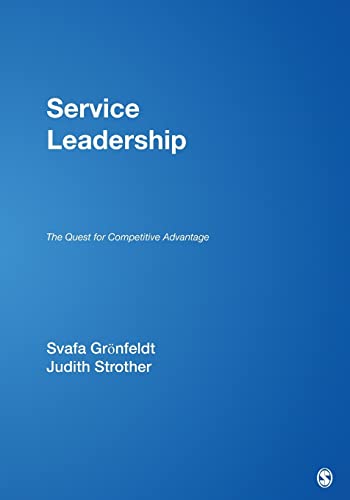 The purpose of this book is to provide a comprehensive theoretical framework as well as practical strategies―not just for survival but for a true search for excellence in the uncertain and ever-changing world of customer service management.  The theoretical framework is based on the notion that customer service contains three key variables: a promise, a process, and people. After going through the step-by-step process of service management, the reader will have the necessary understanding and skill to choose the right strategy for the right circumstances, to design service processes, to identify the means and methods to implement these processes, and to measure the outcome.

Svafa Grönfeldt is Deputy to the CEO of Actavis Group, one of the world’s largest and fastest growing generic pharmaceutical companies.  Her major role is to streamline strategy and structural design with the purpose of facilitating growth and adaptability of the company and its subsidiaries through out the world. She received her Ph.D. in Industrial Relations from the London School of Economics and Political Science, where her major focus was on service orientation and management. For the past 9 years, she has also been a member of the faculty of economics and business administration at the University of Iceland.
Currently her work takes her throughout the world and is mainly focused on aligning strategy, structure, and the talent of Actavis key personnel in five continents and 32 countries. Dr. Grönfeldt joined Actavis in 2004 as Chief Executive of Strategy and Organizational Development. Prior of joining Actavis she was the County-Managing Partner for Deloitte Consulting in Iceland and was a member of Deloitte’s EMEA leadership team; before that, she was a partner in and Director of Research and Development for IMG Gallup. Her consulting and academic career has mainly been focused on leadership coaching and service strategic formulation, and her research projects include numerous occupational and benchmarking studies for companies in the private and public sectors, including numerous longitudinal and cross-cultural studies.

Dr. Judith Strother is Chair of the Graduate Program in Communication at Florida Institute of Technology and teaches a wide variety of business communication courses there. She earned her Ph.D. at Eindhoven University of Technology (The Netherlands), regularly lectures in Europe, and has consulted with business interests in Europe and the United States. Dr. Strother is also Vice President of ViLLA, an online language training corporation, whose primary markets are Asia, South America, and Europe. In that capacity, in addition to overseeing all the content development of the training programs, she has been responsible for developing marketing and customer service programs.

"Service Leadership moves beyond the theoretical and demonstrates how Actavis and other companies achieve and sustain their competitive advantage through service leadership . . . What makes this book so valuable is the variety of formats from which the reader can choose. The key points, summaries, examples from many companies, and words of wisdom from leaders as diverse as Benjamin Distaeli and Beverly Sills empower readers to develop the strategies that will make them leaders in the competitive marketplaces in which they work and serve." -- Judith E. Shenouda Published On: 2007-02-12

Book Description Paperback. Condition: New. Language: English. Brand new Book. Providing a solid focus on strategy throughout the text, this book introduces and operationalizes a new concept - service leadership. The authors provide discussions of methods associated with the identification and tracking of customer needs in a strategic and design process context. The book integrates the use of applications and measurements and incorporates extensive cases and interviews from executives at large multinational corporations, representing various countries and cultures. Seller Inventory # AAV9781412913751

Shipping: US$ 34.40
From United Kingdom to U.S.A.
Destination, rates & speeds

Shipping: US$ 9.62
From United Kingdom to U.S.A.
Destination, rates & speeds

Shipping: US$ 0.69
From United Kingdom to U.S.A.
Destination, rates & speeds