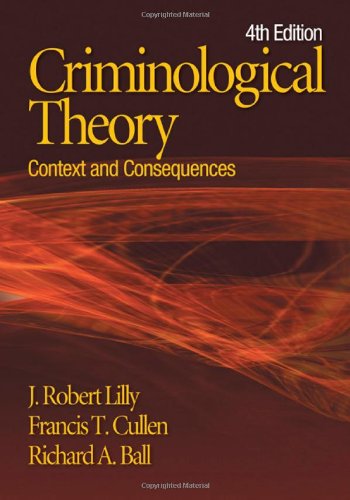 The Fourth Edition of this highly successful text moves readers beyond often-mistaken common-sense understandings of crime by providing a rich introduction to how major scholars analyze crime. Criminological Theory: Context and Consequences, Fourth Edition shows the real-world relevance of theory by illuminating how ideas about crime play a prominent role in shaping crime-control policies and compelling students to apply theories to the contemporary milieu.

J. Robert Lilly is Regents Professor of Sociology/Criminology and Adjunct Professor of Law at Northern Kentucky University. His research interests include the pattern of capital crimes committed by U.S. soldiers during World War II, the “commercial–corrections complex,” juvenile delinquency, house arrest and electronic monitoring, criminal justice in the People’s Republic of China, the sociology of law, and criminological theory. He has published in Criminology, the British Journal of Criminology, Crime and Delinquency, Social Problems, Legal Studies Forum, Northern Kentucky Law Review, Journal of Drug Issues, The New Scholar, Adolescence, Qualitative Sociology, Federal Probation, International Journal of Comparative and Applied Criminal Justice, Justice Quarterly, and The Howard Journa of Criminal Justice. He has coauthored several articles and book chapters with Richard A. Ball, and he is coauthor of House Arrest and Correctional Policy: Doing Time at Home (1988). In 2003, he published La Face Cachée des GI’s: Les Viols commis par des soldats amércains en France, en Angleterre et en Allemange pendat la Second Guerre mondial, 1942–1945. It was translated into Italian and published (2004) as Stuppi Di Guerra: Le Violenze Commesse Dai Soldati Americani in Gran Bretagna, Francia e Germania 1942–1945. It was published in English in 2007 as Taken by Force: Rape and American GIs in Europe During World War II. The latter work is part of his extensive research on patterns of crimes and punishments experienced by U.S. soldiers in WWII in the European theater of war. The Hidden Face of the Liberators, a made-for-TV documentary by Program 33 (Paris), was broadcast in Switzerland and France in March 2006 and was a finalist at the International Television Festival of Monte Carlo in 2007. He is the past treasurer of the American Society of Criminology. In 1988, he was a visiting professor in the School of Law at Leicester Polytechnic and was a visiting scholar at All Soul’s College in Oxford, England. In 1992, he became a visiting professor at the University of Durham in England. Between 2006 and 2012, he was coeditor of The Howard Journal of Criminal Justice.