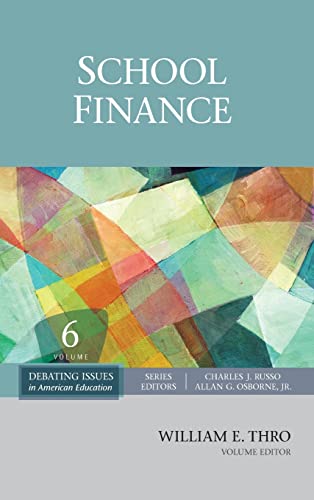 Education of America′s school children always has been and always will be a hot-button issue. From what should be taught to how to pay for education to how to keep kids safe in schools, impassioned debates emerge and mushroom, both within the scholarly community and among the general public. This volume in the point/counterpoint Debating Issues in American Education reference series tackles the topic of school finance. Fifteen to twenty chapters explore such varied issues as additional fees, charger schools, equity vs. adequacy, federal mandates and funding, merit pay for teachers, property taxes and local revenues, and more. Each chapter opens with an introductory essay by the volume editor, followed by point/counterpoint articles written and signed by invited experts, and concludes with Further Readings and Resources, thus providing readers with views on multiple sides of financial issues with America′s schools and pointing them toward more in-depth resources for further exploration.

His scholarship focuses on constitutional law in educational contexts in both the United States and South Africa. He has authored or coauthored more than 50 articles in peer-reviewed publications and has written extensively on the subject of school finance litigation.

Shipping: FREE
From Thailand to U.S.A.