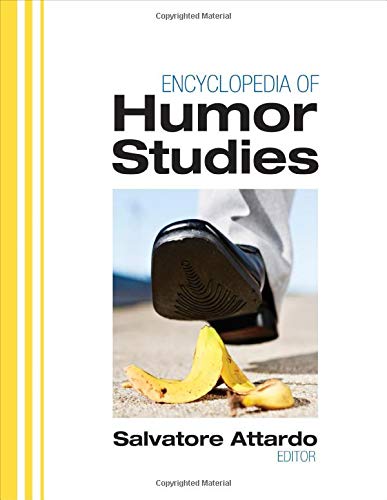 The Encyclopedia of Humor: A Social History explores the concept of humor in history and modern society in the United States and internationally. This work’s scope encompasses the humor of children, adults, and even nonhuman primates throughout the ages, from crude jokes and simple slapstick to sophisticated word play and ironic parody and satire. As an academic social history, it includes the perspectives of a wide range of disciplines, including sociology, child development, social psychology, life style history, communication, and entertainment media. Readers will develop an understanding of the importance of humor as it has developed globally throughout history and appreciate its effects on child and adult development, especially in the areas of health, creativity, social development, and imagination. This two-volume set is available in both print and electronic formats.

This two-volume, A-to-Z set provides a general, non-technical resource for students and researchers in such diverse fields as communication and media studies, sociology and anthropology, social and cognitive psychology, history, literature and linguistics, and popular culture and folklore.

Salvatore Attardo was trained as a linguist at the Catholic University of Milan, Italy, where he graduated in foreign languages and literature (French), with a dissertation on the linguistics of humor, in 1986. In 1988, he moved to the United States to attend Purdue University. In 1991, together with Victor Raskin, Attardo published a long article that developed Raskin’s own semantic theory of humor into the general theory of verbal humor (GTVH). Later that year he received a PhD in English from Purdue University, with a specialization in linguistics and a dissertation on the linguistics of humor, which was published in 1994 as his first book, Linguistic Theories of Humor. Attardo was professor of linguistics at Youngstown State University from 1992 to 2007. He coauthored, with Steven Brown, a sociolinguistics textbook, Understanding Language Structure, Interaction, and Variation (2000) and authored Humorous Texts (2001). He served as editor-in-chief of HUMOR: International Journal of Humor Research from 2001 to 2011. With Diana Elena Popa, he coedited the book New Approaches to the Linguistics of Humor (2007), and with Manuela Maria Wagner and Eduardo Urios-Aparisi, he coedited Prosody and Humor (2013). In 2007, he became chair of the Department of Literature and Languages at Texas A&M University–Commerce. In 2010, he became dean of the College of Humanities, Social Sciences, and Arts at Texas A&M University– Commerce, where he is also professor of linguistics. Attardo’s research is focused primarily on humor studies and pragmatics. He has published more than 100 articles and book reviews in scholarly journals. He serves on the editorial board of the Journal of Pragmatics and other journals. In the past decade, his interests have broadened to include the prosody and gestures accompanying humor, mainly working in collaboration with his wife, Lucy Pickering. In non-humor-related topics, Attardo has published in the fields of semantics, pragmatics, Italian studies, grammar, the pedagogy of linguistics, stylistics, cognitive linguistics, and computational linguistics.

"Organized along the same clean lines as a number of other SAGE encyclopedias published recently and edited by a scholar of the linguistic theories of humor, this set is clearly most suited to academic libraries, but could also be useful for larger public libraries" -- M. Schumacher, American Reference Books Annual Published On: 2016-05-01

General editor Attardo (Texas A&M Univ.–Commerce; former editor in chief, HUMOR: International Journal of Humor Research) offers this two-volume set to address the lack of a comprehensive overview of the field for students, researchers, and laypeople.  Members of the general public will appreciate browsing an authoritative introduction to the history and range of humor and its impact on individual and culture development.  However, the main audience for this encyclopedia will be students and researchers who are exploring the diverse theories and extensive research of the developing interdisciplinary field of humor studies. Summing Up: Recommended. Lower-division undergraduates through researchers/faculty; general readers. -- A. I. Piper, CHOICE Published On: 2015-01-01

As a print book converted to an electronic incarnation, the product succeeds very well. The extensive, interrelated e-searching of subjects makes it easier to use, in a much more sophisticated way, than the print. And for this price it is a tremendous bargain. This reference will serve social science scholars who are serious about humor. -- Cheryl LaGuardia, Library Journal Published On: 2014-12-02

"A thorough survey of humor, Attardo′s two-volume text defines and examines the far reaches of comedy. ...As a reference base, the work maintains multinational, multiethnic awareness ... A well-balanced study of the subject, Attardo′s encyclopedia belongs in most academic and public libraries." -- Mary Ellen Snodgrass, Booklist Published On: 2014-09-01

"Mark Twain famously said, "The truth is the funniest joke ever told." But this raises an important question: What the heck is so humorous about humor, anyway? Among the 300-plus signed entries in the far-ranging work are a triad of articles that attempt to answer that very query. ...Entries are uniformly well written and researched, each concluding with cross-references and a further reading list. ...VERDICT: Laughter is the best medicine, and there is a good deal present here, as examples abound. Entertaining as well as informative, this is one of those rare reference books that warrants reading from cover to cover. Strongly recommended for purchase by public and academic libraries." -- Michael Bemis, Library Journal-Starred Review Published On: 2014-09-05

Shipping: US$ 10.63
From United Kingdom to U.S.A.
Destination, rates & speeds

Shipping: US$ 46.57
From United Kingdom to U.S.A.
Destination, rates & speeds