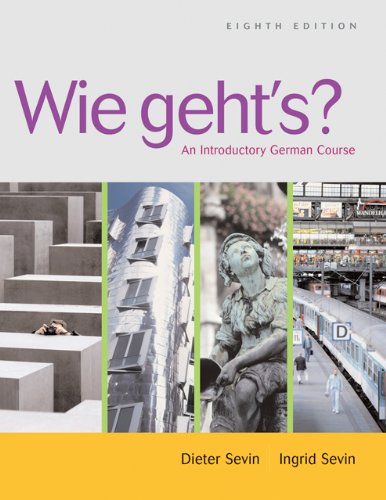 Focused on building linguistic skills and comprehension through creative introductions to contemporary life and cultures in Germn-speaking countries, WIE GEHT'S? Eighth Edition is the clear choice to prepare your students to communicate in German-in and beyond your classroom! Now in its Eighth Edition, WIE GEHT'S? remains one of the most popular introductory German programs in the country. As the authors-both native Germans-show students how the German language actually works, they encourage cultural awareness and the acquisition of a functional vocabulary that effectively prepares students to continue their study of German.

Dieter Sevin, a native of Germany, was Professor of German at Vanderbilt University. He received grants from organizations such as the American Philosophical Association, American Council of Learned Societies, German Academic Exchange Service, and the Vanderbilt Research Council.