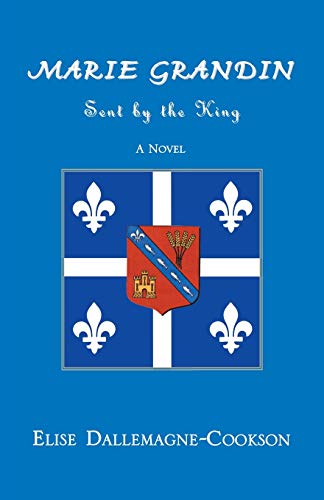 "In her fifth book, a sweeping historical novel, Elise Dallemagne-Cookson takes us into the world of French Canada, where explorers, adventurers, churchmen, and settlers live in a world of constant struggle, destined not to end until England emerges triumphant in the Seven Years' War. We see all this through the eyes of Marie Grandin, whose tangled life begins in 1668 in Orleans, France, where a talented young girl flees a broken romance to go to Canada. There she finds love, war, Indians, adventurers, and friends like La Salle, the great explorer of the American interior, and Count Frontenac, among many others. It's a tale of high adventure and romance, told against a backdrop that is one of the most fascinating chapters in North American history. And Marie herself is an unforgettable heroine." John Tebbel, Historian, author of The Battle for North America.

"Dallemagne-Cookson took me to another world and I feel I have a much stronger sense of early Canada and historical events...along with Marie Grandin and other historical figures. The author rose to the challenge of giving the reader a sense of what life really might have been like back then. The characters are intriguing and compelling." Carl Waldman, author of Atlas of the North American Indian. "...interesting and educational. The women who were "Sent by the King" were extraordinarily brave and strong. They left homes and country to explore and civilize an unknown world; and the journey lasted a lifetime. The author's autobiographical books qualify her to write of such brave women. She followed in her ancestors' footsteps and led a life of adventure and danger from the United States to Africa, Europe, the South Pacific, and South America. Read them all!" Joyce Ryker-Bryson Ray, editor (retired), Governmental Research, University of Oregon.

"Why did you want to write this book?" is the question I am often asked. This is not easy to understand unless one knows something of my background. My grandfather, nine generations ago, was Jean Baudet, who came from France to Quebec in 1664 and married Marie Grandin in 1670. She was among those few selected young women who were sent to Canada over a period of ten years (1663-1673) by the court of King Louis XIV. They later became known to history as "Les Filles du Roi" - the King's Daughters. The purpose of the King's program was to provide wives for the settlers of his colony in the New World, where bachelors outnumbered the women twelve to one.

Life was truly primitive on the pampas of Argentina 40 years ago. I often thought about Marie Grandin. She and others like her had hazarded a dangerous sea voyage to live in an unknown part of the world without much hope of ever seeing their homeland again. I often found myself praying for her help, begging her to send me the courage I needed to carry on. When I finally left Argentina, I promised myself that one day I would research her life and times and perhaps write a book about her.

The year is 1668 in Orleans, France. Following the death of her father and an unhappy love affair at the court of Louis XIV, Marie Grandin, age 19, asks to be sent to Canada, where her father had always dreamed of going. She intends to participate in the King's program to send reputable young women from good families to La Nouvelle France, where bachelors far outnumber marriageable girls.

The 3-month voyage is horrendous; many die at sea, but Marie survives, and when she arrives in Quebec, she meets Jean Baudet, age 20, an established farmer and adventurer. However, she cannot reconcile herself to marriage so soon. But when she is caught in a violent storm on the St. Lawrence River, Jean saves her life and soon she agrees to marry him.

Thus begins a long life of adventure and struggle for Marie Grandin in the harsh and hostile climate of 17th Century Canada. She pioneers the settlement of Lotbiniere, participates in La Salle's search for the Mississippi, Governor Frontenac's struggle for peace with the Iroquois, the defense of Quebec against the English, and the rescue of her daughter, kidnapped by the Mohawks. Finally, she is witness to the historic peace treaty of 1701 between the Iroquois and all the Indian nations in French territory from the Great Lakes to the Gulf of Mexico, from the Alleghenies to the Rocky Mountains.

Marie Grandin, as one of the founding mothers of the New World - women who later became know as Les Filles du Roi (Daughters of the King) - figures prominently in the history of Canada. This is her story as conceptualized by the author, one of her innumerable descendents.

1. Marie Grandin : Sent by the King

6. Marie Grandin : Sent by the King