Items related to Old Dogs: Are the Best Dogs

Old Dogs: Are the Best Dogs 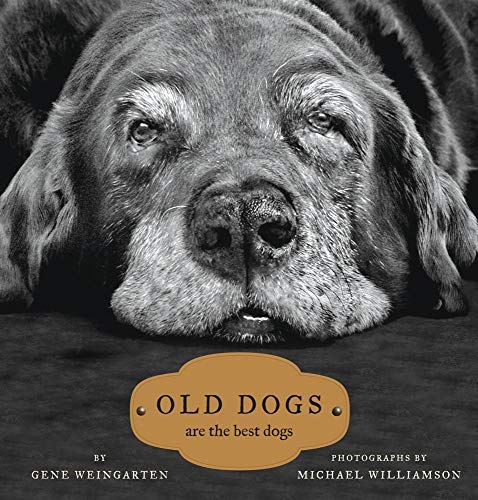 Anyone who has ever loved an old dog will love Old Dogs. In this collection of profiles and photographs, Weingarten and Williamson document the unique appeal of man's best friend in his or her last, and best, years.

This book is a tribute to every dog who has made it to that time of life when the hearing and eyesight begin to go, when the step becomes uncertain, but when other, richer traits ripen and coalesce. It is when a dog attains a special sort of dignity and a charm all his own.

If you've known a favorite old dog, you'll find him or her on these pages. Your dog might go by a different name and have a different shape, but you'll recognize him or her by the look in an eye or the contours of a life story. There is the dog who thinks he is a house cat; the herder, the fetcher, the punk and the peacock, the escape artist, the demolition artist, the patrician, the lovable lout, the amiable dope, the laughable clown, the schemer, the singer, the daredevil, the diplomat, the politician, the gourmand, and the thief. Plus, as a special bonus, you will find the first Latvian elkhounds ever photographed.

Old Dogs is a glorious gift book and a fitting tribute to that one dog you can't ever forget.

Gene Weingarten is a nationally syndicated humor columnist and a Pulitzer Prize–winning staff writer for The Washington Post. He lives in Washington, DC.

Washington Post photographer Michael S. Williamson was born and raised in Washington, DC. A two-time Pulitzer Prize winner, Williamson has covered a variety of global events over the last thirty years, including the wars in El Salvador and Nicaragua, the Philippine revolution, strife in the Middle East, the Gulf War, and conflicts in Africa and the Balkans. At the Post, Williamson works as both a photographer and a photo editor. He lives in Silver Spring, Maryland, with his daughters, Sophia and Valerie.

Shanna solemnly passed the butcher knife to Lance, her 16-year-old son. Shanna was a recent widow, Lance, the new man of the house. It was Lance who had brought home the stray.

Shanna had heard about this breed, particularly ones hardened by the streets, trained to do God Knows What. She knew of a test to find out if a dog is too vicious to keep. The test is not without risk.

"I'm going to give her some food," Shanna said, "and then I'm going to suddenly take it away. If she attacks me, you have to kill her."

They laugh about it now, nine years later. Honey the pit bull, as sweet as her name.Copyright © 2008 by Gene Weingarten and Michael S. Williamson

1. Old Dogs: Are the Best Dogs

2. Old Dogs are the Best Dogs

3. Old Dogs: Are the Best Dogs

4. Old Dogs: Are the Best Dogs

5. Old Dogs: Are the Best Dogs

7. Old Dogs: Are the Best Dogs

8. Old Dogs: Are the Best Dogs

9. Old Dogs: Are the Best Dogs

10. Old Dogs: Are the Best Dogs (Hardback or Cased Book)