Items related to Little Things: A Memoir in Slices

Little Things: A Memoir in Slices 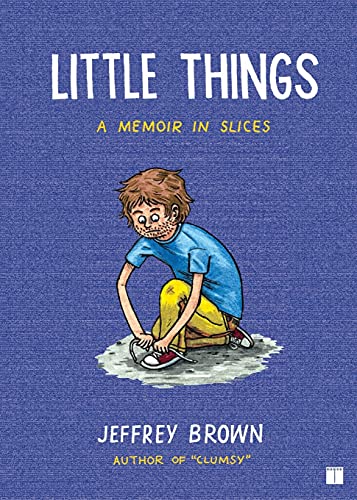 A collection of funny, poignant, and autobiographical short stories, Little Things looks at the aspects of daily life -- friendship, illness, death, work, crushes, love, jealousy, and fatherhood -- we take for granted. As each story loops into others, Jeffrey Brown shows how the smallest andseemingly most insignificant parts of everyday life can end up becoming the most meaningful. Brown's first full-length autobiographical book in several years, Little Things is also his most impressive, touching, and true.

A comics memoirist in the slightly worn-out quotidian mode pioneered by Harvey Pekar, Brown has already produced a series of books about his relationships with women. This one's a bit more scattered—it's a collection of short pieces about the last two years of Brown's life, including some medical troubles, a camping trip, various interactions with his cat and a lot of not-particularly-momentous conversations with friends. It doesn't quite cohere into a narrative, although the final section, A Little Piece of Myself, gives his relationship stories some closure, showing Brown as a new dad meeting his girlfriend's father. Like his earlier autobiographical books, Little Things is drawn in quick pen doodles—Brown's big-headed, stubbly, emotionally fraught self-caricature appears in almost every panel, and he loads his images with evocative physical details. The ultra-casual style occasionally pays off in comedy, as when he captions a scribbled sketch of a driver who hit his friend's car actual expression may have been smarmier than appears. But a handful of his anecdotes veer into tedious accounts of his life as a cartoonist, and most of them ramble aimlessly for too long; his ability to minutely recall his experiences of various kinds of day-to-day ennui doesn't make them interesting. (Apr.)
Copyright © Reed Business Information, a division of Reed Elsevier Inc. All rights reserved.

"Jeffrey Brown is one of my favorite graphic memoirists. And one of the funniest. Each book is like another glimpse into one of the best diaries anyone anywhere is keeping."

"If I were Pippi Longstocking, Jeffrey Brown's Little Things is exactly the sort of treasure I'd plant in a hollow tree, as a day-making gift for a stranger, a friend, or anyone who needs convincing that there's magic in the mundane."

-- Ayun Halliday, creator of The East Village Inky and author of No Touch Monkey!

2. Little Things: A Memoir in Slices (Paperback or Softback)

6. Little Things: A Memoir in Slices

9. Little Things: A Memoir in Slices

10. Little Things: A Memoir in Slices