Items related to Map of Ireland: A Novel

Map of Ireland: A Novel 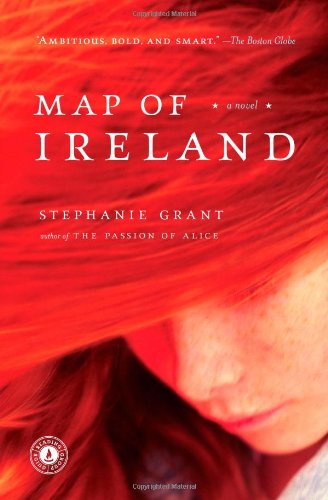 In 1974, when Ann Ahern begins her junior year of high school, South Boston is in crisis -- Catholic mothers are blockading buses to keep Black children from the public schools, and teenagers are raising havoc in the streets. Ann, an outsider in her own Irish-American community, is infatuated with her beautiful French teacher, Mademoiselle Eugénie, who hails from Paris but is of African descent. Spurred by her adoration for Eugénie, Ann embarks on a journey that leads her beyond South Boston, through the fringes of the Black Power movement, toward love, and ultimately to the truth about herself.

Stephanie Grant is an award-winning writer whose first novel, The

Passion of Alice, was longlisted for Britain's Orange Broadband Prize for

Fiction. She has taught creative writing at Ohio State University and Mount

Holyoke College and is currently visiting writer at the Franklin Humanities

Mademoiselle Eugénie was the blackest person I'd ever seen. She was tall, with giant, almond eyes, and penciled eyebrows, and her hair sat high and stiff on her head, almost bouffant. On the first day of French class my junior year -- which was not the first day of school -- if you read the paper you know what happened the first day of school in South Boston in 1974; or even if you don't read the paper you probably know because it made the six o'clock news: There was film footage of the White parents lining Day Boulevard, throwing rocks at the buses, people we knew, Patty Flynn's ma -- just the back of her head -- but we recognized her from the bright red car coat. I can't remember any classes from that week, or the week after, just the yellow buses crawling up the hill: South Boston High sits up high on a hill, Telegraph Hill, and you can see the water from the top of the school steps; you can see cold, dirty, boatless Boston Bay. On the first day of French class that I can remember, the color shone off Mademoiselle Eugénie's skin, and I realized then, for the first time, that black had other colors in it.

She was bright, not shimmery like a lightbulb, but she lit up the room with her intensity and I wanted to look away but couldn't. We all watched her move around class the way French teachers do, darting between the rows of desks, up to the blackboard, then back to us, asking questions but moving before you could answer, so you had to crane your neck every which way to follow her complicated trajectory from your seat. I'm sure there's some scientific reason for it -- like the part of your brain that learns foreign languages is wired to the part of your brain that cranes your neck -- because they all do it, every freaking French teacher I've ever met.

But Mademoiselle Eugénie was the best. She was the best because she made you want to learn French. She made you want to be French. Or, at least, be another person. Someone not yourself. Someone, say, who moved her mouth in a particular way, like she was carefully sucking on a small egg, a robin's egg, maybe, although I don't think there are robins in Senegal, which is where Mademoiselle Eugénie is from, her family, I mean, before France: Senegal, West Africa. Someone who makes these wicked unusual, wicked un-American expressions because she's always sucking on that imaginary egg; someone who shows surprise, delight even, at sappy French sentences like, "My name is Ann Ahern and I want to go to the cinema." Someone who says cinema instead of movies.

My troubles began with several letters I wrote but didn't mail to Mademoiselle Eugénie. When I say, "my troubles," I mean everything that happened to me that first year of the busing. Everything I'm taking the time to tell you about here, now. Everything that has landed me in St. Joseph's Home for Girls. If I was a certain kind of person, I'd blame my troubles on the desegregation itself. I'd blame my being stuck here on those stupid yellow buses and the violence they seemed to bring.

But the truth is, my troubles started because I was too chicken to mail those letters and decided to burn them instead. The whole point of my telling the story is to tell the truth: It's the only way I know how to feel better anymore. I stopped going to church, not casually, not incidentally, but on purpose. I had what Sister Gail called a crisis of faith, but which was simply the realization that I had none -- no flicker, no flame; you can't fake that -- back when I was twelve. Even though I'm not a practicing Catholic anymore, I still need confession. They say once a Catholic, always a Catholic, and now that I don't partake of the sacraments, it's the confession itself that has become my penance.

My junior year in high school was a wild year, full of wild, what you might call, improbable change. It was the year when Nixon resigned and Ford became president; when Patty Hearst got kidnapped, then robbed a bank, and became Tania. We all watched her on TV, waving the machine gun. Also on TV, President Ford forgave Nixon. Then he partly forgave the draft dodgers. President Ford, it seemed, was full of forgiveness. Nobody else was. Nixon's pardon came three days before the first day of school in South Boston.

Sister Gail says the true meaning of the sacrament of penance is not forgiveness, but self-knowledge. She says it's through our sins, our trespasses, that we come to know who we truly are. I guess I'm trying to know myself, then, by telling this story; I'm trying to understand who my actions say I have become. My actions were this: I burned down the house of my friends. No one died, but someone went to jail because of what the police found inside. Remember, when people say, burned to the ground, they're usually speaking hyperbolically.

What, you think, because I live in the projects, I don't know that word, hyperbolic? Well, you're wrong. It's an Irish word. I inherited it from my family.

In three weeks, I turn eighteen and can leave St. Joe's, which, don't be fooled by the name, is a state facility for juvenile girls. In three weeks, I will have served out my full sentence, twenty months, my penance to the commonwealth. When I leave here, I will be officially, legally, absolved by the state. But like most Catholics, practicing or not, I know that being absolved of wrongdoing and being absolved of guilt are two entirely different things. To tell the truth, the hardest part about not believing in God is having to live your whole life in the state of being not forgiven.

But now I'm getting ahead of myself.

Mademoiselle Eugénie came to Southie that year all the way from Paris, France. She was on an exchange program, except with teachers instead of kids. Mademoiselle Eugénie's other half was Mademoiselle Kit Kelly, our regular teacher, who'd taught at Southie High for years, since way back before the busing, when they needed one whole homeroom class for all the kids whose last names started with Mc.

My sophomore year, Mademoiselle Kit applied for the same program, and she made each of her classes do a special unit on the French capital. We all got maps and had to learn the different arrondissements by heart and I kept getting the left and right banks confused, which was stupid, I admit, but she took it like a personal insult, my inability to feel the difference between the two banks, like they meant anything at all to me, like they were anything but a bunch of squiggly lines on a page.

Every day in class, we ate Pillsbury Crescent Rolls that Mademoiselle Kit baked herself and we pretended that we'd just gotten back from the goddamn Louvre and were on our way to the goddamn Tuileries, which the whole class got in trouble for pronouncing Tool-eries. Où est Didier? Didier est au Jardin du Luxembourg, wherever on earth that is.

When Mademoiselle Kit's acceptance letter arrived saying she was definitely going to Paris, she made us all learn the French national anthem. The administration liked the idea so much, they made our decrepit music teacher teach the whole tenth-grade class the complicated French song. We had an assembly first period on the day Mademoiselle Eugénie arrived, which was the last day of school my sophomore year, the year before the busing began. Mademoiselle Eugénie had come to the United States early so she could have the entire summer to make the acquaintance of the city of Boston. That was how she talked: She didn't meet you, she made your acquaintance.

We must've sat in the assembly for two hours -- not that anyone cared, we were just waiting for school to end, counting down each period bell -- eleven! ten! nine! Later, we found out they'd kept her waiting while the headmaster called the exchange program to confirm that she was the right French teacher, the same one we were expecting, the very same Mademoiselle Eugénie Martine, from Paris, France. They made her sit in the outer office where you get sent when you're in trouble, a grimy little passageway with slippery plastic chairs and out-of-focus pictures on the walls of famous graduates who nobody's ever heard of and local politicians like Louise Day Hicks and Ray Flynn and Billy Bulger. Mademoiselle Eugénie sat, probably trying not to slide in her seat, chatting with Mademoiselle Kit, until the headmaster heard from three different people that the Black lady outside his door was definitely French.

Instead of singing "La Marseillaise" like we were supposed to, we sang "Southie Is My Hometown."

Shipping: FREE
From Ireland to U.S.A.