Items related to The White Tiger: A Novel

The White Tiger: A Novel 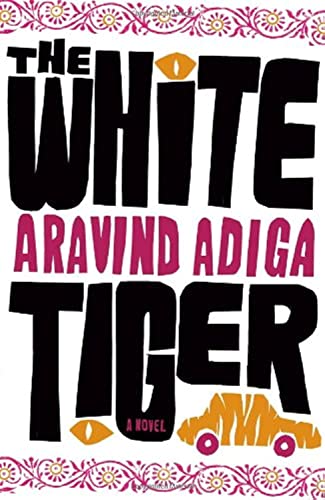 Relocating to New Delhi when he is offered a new job, Balram Halwai is disillusioned by the city's twenty-first-century materialism and technology-spawned violence, a circumstance that forces him to question his loyalties, ambitions, and past. A first novel. 75,000 first printing.

Aravind Adiga was born in India in 1974 and attended Columbia and Oxford universities. A former correspondent for Time magazine, he has also been published in the Financial Times. He lives in Mumbai, India.

For the Desk of:


From the Desk of:

"The White Tiger"
A Thinking Man
And an Entrepreneur
Living in the world's center of Technology and Outsourcing
Electronics City Phase 1 (just off Hosur Main Road)
Bangalore, India

Neither you nor I speak English, but there are some things that can be said only in English.

My ex-employer the late Mr. Ashok's ex-wife, Pinky Madam, taught me one of these things; and at 11:32 p.m. today, which was about ten minutes ago, when the lady on All India Radio announced, "Premier Jiabao is coming to Bangalore next week," I said that thing at once.

In fact, each time when great men like you visit our country I say it. Not that I have anything against great men. In my way, sir, I consider myself one of your kind. But whenever I see our prime minister and his distinguished sidekicks drive to the airport in black cars and get out and do namastes before you in front of a TV camera and tell you about how moral and saintly India is, I have to say that thing in English.

Now, you are visiting us this week, Your Excellency, aren't you? All India Radio is usually reliable in these matters.

That was a joke, sir.

That's why I want to ask you directly if you really are coming to Bangalore. Because if you are, I have something important to tell you. See, the lady on the radio said, "Mr. Jiabao is on a mission: he wants to know the truth about Bangalore."

My blood froze. If anyone knows the truth about Bangalore, it's me.

Next, the lady announcer said, "Mr. Jiabao wants to meet some Indian entrepreneurs and hear the story of their success from their own lips."

She explained a little. Apparently, sir, you Chinese are far ahead of us in every respect, except that you don't have entrepreneurs. And our nation, though it has no drinking water, electricity, sewage system, public transportation, sense of hygiene, discipline, courtesy, or punctuality, does have entrepreneurs. Thousands and thousands of them. Especially in the field of technology. And these entrepreneurs -- we entrepreneurs -- have set up all these outsourcing companies that virtually run America now.

You hope to learn how to make a few Chinese entrepreneurs, that's why you're visiting. That made me feel good. But then it hit me that in keeping with international protocol, the prime minister and foreign minister of my country will meet you at the airport with garlands, small take-home sandalwood statues of Gandhi, and a booklet full of information about India's past, present, and future.

That's when I had to say that thing in English, sir. Out loud.

I don't just swear and curse. I'm a man of action and change. I decided right there and then to start dictating a letter to you. To begin with, let me tell you of my great admiration for the ancient nation of China.

I read about your history in a book, Exciting Tales of the Exotic East, that I found on the pavement, back in the days when I was trying to get some enlightenment by going through the Sunday secondhand book market in Old Delhi. This book was mostly about pirates and gold in Hong Kong, but it did have some useful background information too: it said that you Chinese are great lovers of freedom and individual liberty. The British tried to make you their servants, but you never let them do it. I admire that, Mr. Premier.

I was a servant once, you see.

Out of respect for the love of liberty shown by the Chinese people, and also in the belief that the future of the world lies with the yellow man and the brown man now that our erstwhile master, the white-skinned man, has wasted himself through buggery, cell phone usage, and drug abuse, I offer to tell you, free of charge, the truth about Bangalore.

By telling you my life's story.

See, when you come to Bangalore, and stop at a traffic light, some boy will run up to your car and knock on your window, while holding up a bootlegged copy of an American business book, wrapped carefully in cellophane and with a title like:

Don't waste your money on those American books. They're so yesterday.

In terms of formal education, I may be somewhat lacking. I never finished school, to put it bluntly. Who cares! I haven't read many books, but I've read all the ones that count. I know by heart the works of the four greatest poets of all time -- Rumi, Iqbal, Mirza Ghalib, and a fourth fellow whose name I forget. I am a self-taught entrepreneur.

That's the best kind there is, trust me.

When you have heard the story of how I got to Bangalore and became one of its most successful (though probably least known) businessmen, you will know everything there is to know about how entrepreneurship is born, nurtured, and developed in this, the glorious twenty-first century of man.

The century, more specifically, of the yellow and the brown man.

It is a little before midnight now, Mr. Jiabao. A good time for me to talk.

I stay up the whole night, Your Excellency. And there's no one else in this 150-square-foot office of mine. Just me and a chandelier above me, although the chandelier has a personality of its own. It's a huge thing, full of small diamond-shaped glass pieces, just like the ones they used to show in the films of the 1970s. Though it's cool enough at night in Bangalore, I've put a midget fan -- five cobwebby blades -- right above the chandelier. See, when it turns, the small blades chop up the chandelier's light and fling it across the room. Just like the strobe light at the best discos in Bangalore.

This is the only 150-square-foot space in Bangalore with its own chandelier! But it's still a hole in the wall, and I sit here the whole night.

The entrepreneur's curse. He has to watch his business all the time.

Now I'm going to turn the midget fan on, so that the chandelier's light spins around the room.

I am relaxed, sir. As I hope you are.

Before we do that, sir, the phrase in English that I learned from my ex-employer the late Mr. Ashok's ex-wife Pinky Madam is:

What a fucking joke.

Now, I no longer watch Hindi films -- on principle -- but back in the days when I used to, just before the movie got started, either the number 786 would flash against the black screen -- the Muslims think this is a magic number that represents their god -- or else you would see the picture of a woman in a white sari with gold sovereigns dripping down to her feet, which is the goddess Lakshmi, of the Hindus.

It is an ancient and venerated custom of people in my country to start a story by praying to a Higher Power.

I guess, Your Excellency, that I too should start off by kissing some god's arse.

Which god's arse, though? There are so many choices.

See, the Muslims have one god.

The Christians have three gods.

Now, there are some, and I don't just mean Communists like you, but thinking men of all political parties, who think that not many of these gods actually exist. Some believe that none of them exist. There's just us and an ocean of darkness around us. I'm no philosopher or poet, how would I know the truth? It's true that all these gods seem to do awfully little work -- much like our politicians -- and yet keep winning reelection to their golden thrones in heaven, year after year. That's not to say that I don't respect them, Mr. Premier! Don't you ever let that blasphemous idea into your yellow skull. My country is the kind where it pays to play it both ways: the Indian entrepreneur has to be straight and crooked, mocking and believing, sly and sincere, at the same time.

So: I'm closing my eyes, folding my hands in a reverent namaste, and praying to the gods to shine light on my dark story.

Bear with me, Mr. Jiabao. This could take a while.

My eyes are open again.

A statutory warning -- as they say on cigarette packs -- before we begin.

One day, as I was driving my ex-employers Mr. Ashok and Pinky Madam in their Honda City car, Mr. Ashok put a hand on my shoulder, and said, "Pull over to the side." Following this command, he leaned forward so close that I could smell his aftershave -- it was a delicious, fruitlike smell that day -- and said, politely as ever, "Balram, I have a few questions to ask you, all right?"

"Balram," Mr. Ashok asked, "how many planets are there in the sky?"

I gave the answer as best as I could.

"Balram, who was the first prime minister of India?"

And then: "Balram, what is the difference between a Hindu and a Muslim?"

And then: "What is the name of our continent?"

Mr. Ashok leaned back and asked Pinky Madam, "Did you hear his answers?"

"Was he joking?" she asked, and my heart beat faster, as it did every time she said something.

"No. That's really what he thinks the correct answers are."

She giggled when she heard this: but his face, which I saw reflected in my rearview mirror, was serious.

"The thing is, he probably has...what, two, three years of schooling in him? He can read and write, but he doesn't get what he's read. He's half-baked. The country is full of people like him, I'll tell yo...

1. The White Tiger: A Novel

2. The White Tiger: A Novel

3. The White Tiger: A Novel

4. The White Tiger: A Novel

Book Description Hardcover. Condition: New. Dust Jacket Condition: New. 1st Edition. FIRST EDITION/FIRST PRINTING with a complete number line beginning in 1. THE BOOK IS NEW & UNREAD - SPINE HAS NOT BEEN CRACKED - no flaws or defects - Hardcover in Dust Jacket as issued. DUST JACKET IN PROTECTIVE BRODART COVER - A VERY COLLECTIBLE COPY OF THIS BOOK - Man Booker Prize Winner for 2008 - PHOTOS OF THE ACTUAL BOOK SENT UPON REQUEST. THIS IS AN INTRODUCTORY PRICE FOR OUR GRAND RE-OPENING. ALL PRICES WILL BE ADJUSTED IN MAY TO REFLECT MARKET PRICES. The boards Are Clean, Not Bumped. Fore Edges Are Clean. Dust Jacket Is In Fine Condition. No Chipping, Crinkles, or tears. Not Price Clipped. All books are boxed and shipped with bubble wrap - ALL BOOKS HAVE BEEN BOXED IN CLIMATE CONTROLLED STORAGE AND HAVE NOT BEEN TOUCHED BY ANY OTHER HUMAN THAN ME FOR AT LEAST THE LAST 10 YEARS - ALL BOOKS ARE SEALED AND BUBBLE WRAPPED AND SHIPPED IN BOXES - YOU CAN BUY HERE WITH CONFIDENCE KNOWING THAT A BUNCH OF STRANGERS HAVE NOT HANDLED YOUR BOOK -. Seller Inventory # 004167