Items related to Hide and Sheep 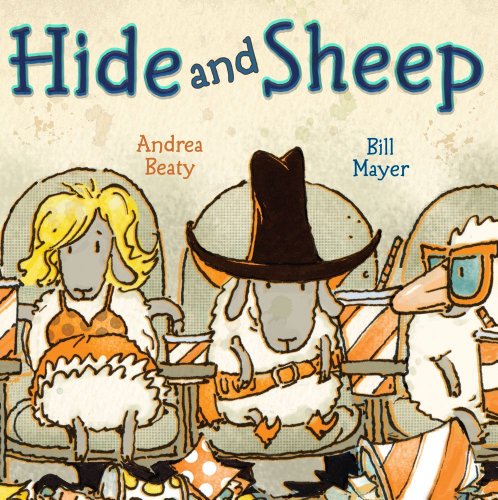 Farmer McFitt’s mischievous sheep have escaped! Who wants to stay on the farm when they could be shot out of a cannon at the circus or go surfing at the beach—they even pose as art in a museum! Can Farmer McFitt round up this rowdy bunch in time for a wooly surprise?

This rollicking, rhyming read-aloud will become a favorite counting and bedtime book for parents and kids. Bill Mayer’s energetic, expressive sheep are adorably silly, and his pictures are chock-full of hilarious details kids will love.

Andrea Beaty is the author of  Doctor Ted; Firefighter Ted; Hush, Baby Ghostling; When Giants Come to Play; and Iggy Peck, Architect. As a kid, she spent her days being a detective, world explorer, movie star, and spy. Now, as a children's author, she spends her days pretty much the same way! She lives in the Chicago area. You can visit her online at andreabeaty.com.

Bill Mayer's work has appeared in major journal publications such as the New York Times magazine, National Geographic, Time magazine, Sports Illustrated, and the Wall Street Journal. He also created the Bright Eyes stamp series for the U.S. Postal Service, and has illustrated picture books such as All Aboard by Chris Demarest. Bill lives with his wife, a fellow artist, in Decatur, Georgia. For more information, visit him at thebillmayer.com.