Items related to The Tale of Zuko (Avatar, the Last Airbender: The Earth...

The Tale of Zuko (Avatar, the Last Airbender: The Earth Kingdom Chronicles) 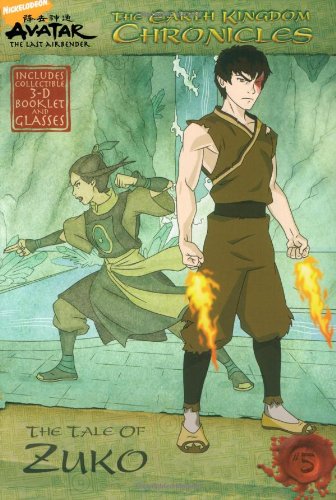 I am Prince Zuko. After being betrayed by my wicked sister, Azula, Uncle Iroh and I have sought new lives in the Earth Kingdom. It is humbling to wander as a refugee, but it has also opened my eyes to the pain the Fire Nation has inflicted on the world -- as well as on me. On one hand I am proud to be a prince of the Fire Nation, but on the other hand I feel very ashamed. What is my destiny? Is it to turn my back on the Fire Nation and start anew, or is it to restore my honor and earn back my rightful place as the future Fire Lord? I have yet to find out.

My name is Zuko. I am a prince of the Fire Nation and heir to the throne. As of now, however, I'm a prince in exile. My father, Fire Lord Ozai, has banished me -- at least until I can deliver the Avatar to him. This scar on my face, given to me by my own father, is merely an outward sign of my humiliation. The true pain of my exile runs much deeper.

So far I have failed to capture the Avatar. But I must succeed, for along with his capture comes the return of my honor, my birthright, and most important of all, my father's respect. I am the older of his two children and it is my destiny to follow my father onto the throne as Fire Lord. But that will never come to pass unless I can redeem myself.

Following our terrible defeat at the hands of the Avatar during a huge battle at the North Pole, my uncle Iroh and I escaped on a homemade raft. After three weeks at sea, clinging by a thread to our very lives, we landed at a resort in the Earth Kingdom. Here we will rest and recover while I plan my next step.

Today is a very sad day. While my uncle, who is fond of his creature comforts, gets a massage, I can think only of the fact that three years ago on this day my father ordered me to leave the Fire Nation.

"It's the anniversary, isn't it?" Uncle asked.

"On this day three years ago I was banished. I lost it all...and I want it back!" But I don't know how to go about getting it. And so I wait and think.

My uncle doesn't care about my problems. As long as he has a full stomach, a hot cup of tea, and a comfortable bed, nothing else matters. He spends his days walking the beach, collecting useless seashells.

One evening after he had returned with a new sack full of shells, I got the shock of my life.

"Hello, brother, Uncle," said a voice from the shadows.

No, it can't be! Azula! My younger sister, here. But how? Why? And what does she want? All she's ever done is tricked me, humiliated me, and shown everyone that she's better than meÂ­ -- better at Firebending, and at gaining our father's affection. She was not the one banished from her home, so what could she possibly want from me?

"What are you doing here?" I shouted.

"What, no hello? Have you become uncivilized, Zu-Zu?"

I hate it when she calls me that. It's just another way of putting me down, making me feel like she's really the big sister and I'm just a little kid.

"I've come with a message from home," she began. "Father's changed his mind. Family is suddenly very important to him. Father regrets your banishment. He wants you home."

Did I just hear that correctly? Is it possible that Father wants me home? All of a sudden, all is forgiven? Can everything in my life change in a matter of seconds?

Now Azula is yelling at me, but I don't hear her. All I can think of is going home.

"Did you hear me?" I finally heard her shout. "You should be happy! Excited! Grateful."

I just can't believe that Father regrets what he did, and that he wants me back. I'm feeling something I haven't felt in three years: hope...and relief. I'm really going home!

At some point Azula left, but I didn't remember her going. This was before Uncle ruined the happiness I was feeling. "I have never known my brother to regret anything," he said. "If Ozai wants you back, it may not be for the reasons you imagine."

How can Uncle betray me like this? Why is he standing there shattering my dreams? "You don't know how my father feels about me. You don't know anything!" I snapped.

I wish he could let me enjoy my moment of redemption.

"You are a lazy, mistrustful, shallow old man who has always been jealous of his brother!" I shouted, then I ran outside.

That's it then, isn't it? Uncle can't hope to be half the man that Father is. For these three years he's been trying to act like he was my father. But now that Father wants me back, Uncle is jealous. He doesn't want to give me up. Well, too bad. I'm not his son. I'm Prince Zuko, son of the Fire Lord, and I am going home!

I hurried away as quickly as I could, making my way toward Azula's ship. But as I walked, doubt began to creep into my mind, and I tried to fend it off.

Can I be wrong about Uncle? Maybe I'm being too harsh. He's always stuck by me no matter what. Maybe I'm judging him too quickly. He would make good company on the long voyage back to the Fire Nation, and --

I hear someone coming up behind me. It's Uncle!

"Wait!" he called, hurrying to catch up. "Don't leave without me!"

"You changed your mind!" He must realize that I'm right about Father, that he really does want me back.

"Family sticks together, right?" was all he said, and that was good enough for me. I'm glad he's here. "We're finally going home," I replied.

As we made our way onto the ship's gangplank, Azula appeared on deck.

She's smiling. She has changed. She is glad to be bringing me back to Father. Maybe everything will work out for me after all.

"Brother! Uncle! I'm so glad you decided to come!" Then she turned to the ship's captain. "Set our course for home, Captain."

"Home." It was the most beautiful word.

"You heard the princess," the captain shouted to the crew. "Raise the anchors. We're taking the prisoners home."

Uncle blasted Azula's soldiers off the gangplank. "Run!" he shouted to me.

"You lied to me!" I yelled at my sister.

Azula simply laughed. "Like I've never done that before."

I'm such a fool for ever thinking she would do something to help me.

"You know Father considers you a miserable failure for not finding the Avatar," Azula continued. "Why would he want you back home except to lock you up where you can no longer embarrass him?"

She taunts me. It's obvious that she's enjoying my humiliation, just like she did when we were kids. I won't let her get away with it!

I fired a Firebending blast right at Azula, but she ducked out of the way and countered with an attack of blue lightning. My little sister has gotten strong. I hate to admit it, but maybe she's too strong for me. She dodges every attack and strikes back with incredible power. I don't know if I can beat her.

Uncle directed one of Azula's lightning blasts away from me, and the force of the blast knocked her overboard. This was our chance to escape.

We raced through the woods before finally stopping when we approached a river.

"I think we are safe here," Uncle said, glancing back over his shoulder.

Once again I am on the run -- now as an outcast from my own people. Azula hurt me today, much more with her betrayal than with her Firebending. I am a fugitive, a desperate soul in hiding, with a lost past and no apparent future.

We wandered through the forest, and we had nothing to eat. "I can't live like this! I wasn't meant to be a fugitive!"

Then Uncle drank a tea he made from some wild berries and broke out in a horrible rash. "When the rash spreads to my throat, I will stop breathing."

Can our situation get any worse? "We need to get help," I told him.

"But where are we going to go?" Uncle asked as he scratched himself everywhere. "We're enemies of the Earth Kingdom and fugitives of the Fire Nation."

"If the Earth Kingdom discovers that we are Fire Nation, they'll get rid of us somehow," I pointed out. "But if the Fire Nation discovers us, we'll be turned over to Azula."

Just the mention of her name makes me angry. I'm not ready to face her again. Not yet. "Earth Kingdom it is," Uncle agreed. It was the lesser of two bad options.

We disguised ourselves as Earth Kingdom citizens and headed into a village, where we found a hospital. They'll be able to help Uncle there.

In the hospital we met a nurse named Song who soothed Uncle's rash, then invited us to her home for dinner.

It's dangerous. We can't risk being found out. Still, I can't remember being so hungry. We'll have to keep a low profile, eat the food, and get out of there quickly.

"My daughter tells me you're refugees," Song's mother said as she served us. "We were once refugees ourselves."

"Yes," Song said. "When I was a little girl, the Fire Nation raided our farming village. All the men were taken away. That was the last time I saw my father."

I don't care to remember the last time I saw my father.

"Nothing." My expression must have betrayed my thoughts. "I haven't seen my father in many years either."

"Oh, is he fighting in the war?" Song asked.

"Yeah." The nurse had been very kind to us. What would she say if she knew who Father really was, if she knew what he had done to her father? I couldn't sit here and eat their food. "I'm not very hungry," I said.

I went outside to think...alone. But Song followed me.

"Can I join you?" she asked, and she sat down beside me without waiting for a reply. "I know what you've been through. We've all been through it. The Fire Nation has hurt you."

What's she doing? She's lifting her hand and reaching for my face. She's going to touch my scar. No! I pushed her hand away.

She showed me her leg, and there was a scar like mine: a burn mark, caused by a Firebender, that was all over her leg. What have we done? This girl meant no harm, yet she has suffered. She -- stop it, Zuko! You're getting soft. Maybe coming here was a bad idea.

I did not know how to respond to Song, but was determined to leave right away.

"Thank you for the duck," Uncle said. "It was excellent."

"Where are your manners?" Uncle chided me as I headed out. "You need to thank these nice people."

"Thank you," I said quickly. They are our enemies. I don't need to thank them for anything.

1. The Tale of Zuko (Avatar, the Last Airbender: The Earth Kingdom Chronicles)

2. The Tale of Zuko (Avatar, the Last Airbender: The Earth Kingdom Chronicles)